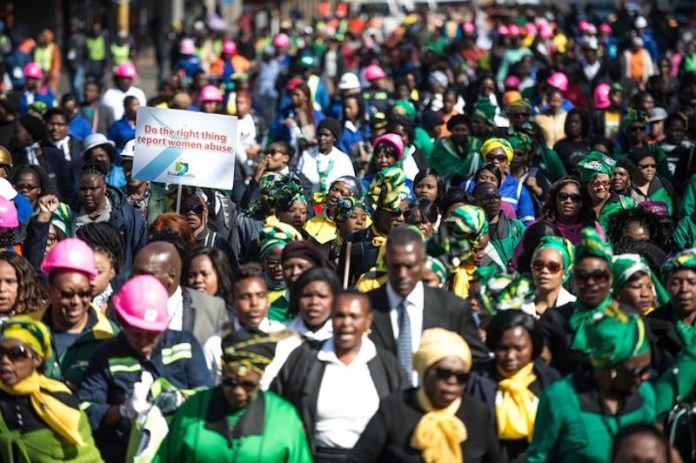 From Jamaica to South Africa, wherever there’s been racism, patriarchy, or all of the above, there have been women organizing to resist it.

The crucial activism of black women has historically been overshadowed, not only by their male counterparts but white women as well.

Movements like those of the Civil Rights era predominantly focused on the men at the movement’s forefront and an overwhelming majority of women’s rights movements (including today’s) are centered on white feminist narratives.

But, nonetheless, black women have persisted.

In honor of International Women’s Day, we’ve highlighted just a few of the protests and movements that have been orchestrated by black women around the globe.

These women didn’t wait for anyone to advocate on their behalf and are reminders that while our plight may be ignored by mainstream narratives, we’ll never be silent in the face of oppression.

Some of the below images may contain graphic material.

In the summer of 1956, 20,000 women in South Africa organized to protest the country’s introduction of pass laws for women―which required women of African descent to apply for permits to travel in and out of certain urban areas. While pass laws had already been in place for men, extending them to women meant that unemployed women would be kept away from their families as they weren’t granted access to towns in which they didn’t work.

The Federation of South African Women and the African National Congress Women’s League led a historic march to the Union buildings where they silently awaited the deliverance of their petitions to the Prime Minister’s office.

The day has since been commemorated in South Africa as Women’s Day. Last year, women celebrated the march’s 60th anniversary (shown above).

Days before Brazil’s National Day of Black Consciousness on November 20, in 2015, over 10,000 black women came together for “Marcha das Mulheres Negras” last year. Women in Brazil marched in resistance to violence, racism and gender inequality.

On April 14, 2015, 276 schoolgirls were kidnapped by extremist rebel group Boko Haram from a Chibok boarding school in Borno State, Nigeria, sparking the #BringBackOurGirls campaign. On the 500th day since the kidnapping, women organized a youth march as a plea for rescue attempts to be made by the Nigerian government. To date, the whereabouts of 219 of the girls remain unknown.

In response to the lack of action being against sexual violence at Rhodes University, in April 2016, topless women gathered on campus grounds to demand school officials be more ardent in their pursuance of reports of rape from students.

After countless instances of young women at a South Africa high school being told to straighten their natural hair, students at Pretoria High School For Girls took to protest to confront the school’s discriminatory hair policies.

After one particular photo from a protest (above) went viral in August 2016, the students of Pretoria garnered international attention to the protests and the #StopRacismAtPretoriaGirlsHigh hashtag.

While the school’s hair policies were suspended during an investigation into racial discrimination at the school took place, as of November, the publicization of the investigation’s outcome were postponed.

Held on the International Day To Eliminate Violence Against Women, last November, nearly 300 women came together in Jamaica in protest of sexual violence. As part of the United Nations’ #16DaysofActivism, the silent protest ― coordianted by Jamaica AIDS Support For Life ― served as a symbol of the countless rape victims who don’t report what happened to them and resultantly, never tell their story.

Founded by three women in 2013, the Black Lives Matter movement spawned in response to the acquittal of George Zimmerman. Since then, the movement has used social media to gain momentum and has hosted innumerable protests within and outside of the United States to challenge state-sanctioned violence.