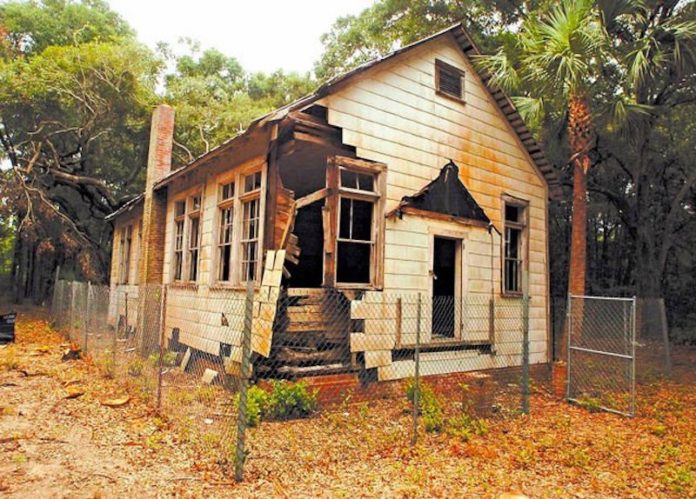 As a girl in the mid-1950s, Amy Roberts would catch a ride each morning with her neighbors the Johnsons, the couple that ran the one-room schoolhouse where Black children were taught on St. Simons Island.

“Mrs. Johnson played the piano and she had the younger children,” Roberts said, recalling her years attending first and second grade at the Harrington School on the Georgia coast in the years before desegregation. “We used to sing. We had to do a Bible verse that begins with a different letter of the alphabet every day.”

The old schoolhouse had been an anchor of the island’s Black community since the 1920s. Saint Simons, a barrier island that’s now a seaside resort and home to more than 12,700 predominantly White residents, looked remarkably different when the Harrington School was new. Roughly three-fourths of the inhabitants were Black descendants of slaves who worked the island plantations until the Civil War.

After integration came the school was eventually abandoned, fell prey to rot and was slated for demolition. Now, however, Roberts and other preservationists are close to finishing a seven-year project to restore it.

The Friends of the Harrington School, a group that raises funds for the project, recently announced it’s been awarded a grant that could bring in the final $50,000 needed to rehabilitate the schoolhouse’s interior. The group hopes to have it ready to open in February.

“It’s a bridge from the times of slavery through the years up to the civil rights era,” said Patty Deveau, the fundraising group’s president. “St. Simons Island has a rich plantation history. But not many places talk about the 150 years of freedom.”

Historians aren’t sure what year the Harrington School opened on the island 70 miles south of Savannah, but it was in the early 1920s. Thousands of schools for Black children were being built across the South in a partnership between the Tuskegee Institute under Booker T. Washington and philanthropist Julius Rosenwald, the CEO of Sears, Roebuck and Co.

By the late 1920s, one in three Black school children in the rural South were served by Rosenwald schools, according to the National Trust for Historic Preservation. Many of those school buildings later fell into disrepair, and few are still standing.

Saint Simons Island was the home of many Gullah-Geechee people, slave descendants who retained African traditions and mannerisms that survived thanks to their isolation from the mainland. Some worked in sawmills and as carpenters, while others still farmed. Roberts’ father was a bartender, while her mother was employed as a housekeeper.

“The reason they built the Harrington School was because they wanted a better life for their children,” said Roberts, who heads the St. Simons African-American Heritage Coalition.

The school taught about 15 to 40 children at a time, often divided into two groups of younger and older grade levels, until Glynn County schools were desegregated in the 1960s and Harrington’s students were bused to schools on the mainland. The one-room schoolhouse was converted to a daycare that lasted into the 1970s.

The building of 1,250 square feet almost didn’t survive. In 2010, it sat abandoned with gaping holes in its asbestos siding and gaps in the metal roof that let rainwater seep inside, while termites thrived in the crawlspace beneath the heart-pine floors. The Glynn County Commission declared the schoolhouse beyond repair and slated it for demolition.

But Roberts and others determined to save the building banded together. A group of preservation experts visited the schoolhouse and determined the foundation was structurally sound, though extensive work was needed to stabilize and restore the rest.

About $300,000 has been spent on a new roof, repairing the windows and other exterior work including rebuilding the steps and portico leading to the front door. Inside, electrical wiring still must be installed, the floors need sanding and finishing and walls require repairs and painting.

Preservationists hope to finish the job with a grant from the Watson-Brown Foundation that will match dollar-for-dollar up to $25,000 in private donations. Deveau said about $10,000 had already been raised by mid-December and the group hoped to get the rest by the end of the month.

Roberts, who says she “went a little crazy” when county officials planned to tear down her former school, now looks forward to seeing it’s new beginning.

“Now it is so near the finish the line,” Roberts said. “And it’s gorgeous.”