The Houston Museum of African American Culture (HMAAC) is pleased to announce the October 30, 2020 opening of Selected Works from The Paul R. Jones Collection of American Art at the University of Alabama. The exhibition, which is curated by UA’s Emily Bibb, ends January 16, 2021. The Jones Collection includes one of the largest and most comprehensive collections of 20th-century African American art in the world, amassed over decades by the late Paul Raymond Jones, who while alive was identified by Art & Antiques magazine as “one of the top art collectors in the country.”

Jones’ love of photography is highlighted in the works as well as his love for music. He was a ciivil rights activist and the pieces Harriet Tubman, Self Poison is Prison, Dialogue, Mrs. Fannie Lou Hamer, We Couldn’t Vote Then and Rhonda’s Comment remind us that issues presented 30-40 years ago still occupy our attention and challenge us to resolve them. 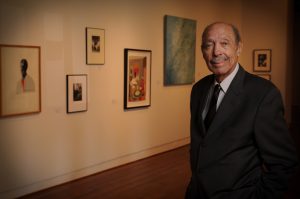 That Jones collection ended up at the University of Alabama involves some irony as well as an enlightening mutual respect by Jones and University officials. Irony because after attending college at Alabama State University and Howard University, Jones application to the University of Alabama Law School in 1949 was officially discouraged on the basis of race. Conversations between Jones and the University in 2008 resulted in his donation of 1,700 works and a later gift of 300 more. The Collection includes pieces created in a variety of mediums and from more than 600 artists. Reciprocally, the University built a state of the art storage facility for the work and additionally established a museum in Jones honor.

Paul Jones road to becoming an art collector began In the early 1960s, through his attendance at the annual African-American art shows organized by Hale Woodruff at Atlanta University. Those shows brought to his attention a shortage of African-American representation in public art exhibits. He began collecting works by African-American artists, often befriending the younger artists from whom he purchased works. He hosted receptions at his home to encourage colleagues to purchase art and put pressure on galleries and museums to recognize African-American artwork.

The genesis of the Collection being exhibited at HMAAC began in late 2018 with a visit to the museum by Dr. Robert Olin, the recently retired UA Dean College of Arts and Sciences, UA’s largest division. Olin, a mathematician known throughout the country for his thoughtful and creative approach to education, and for his scholarship, oversaw the receipt of the Collection by the University in 2008. He and HMAAC CEO John Guess, Jr. found a shared interest in multicultural conversations which led to a discussion of Jones and his multicultural collection. Guess’ subsequent visit to the University in March 2019 allowed him to meet with Collection Curator Emily Bibb and Museum Director Daniel White in addition to Dean Olin. The exhibit Bibb and Guess planned for earlier this year finally has found its way to Houston for this COVID-19 affected opening. Bibb will be giving a curator talk in November via Zoom.

According to Guess, “This has been such a fruitful relationship with the University of Alabama, and there is of course more artwork to mine from the Collection in the future to share with our audience.” He continued, “This exhibit is a wonderful introduction to the Paul R. Jones Collection.” Added HMAAC Board President Cindy Miles, “This exhibit and what follows enhances HMAAC’s tradition of academic collaborations begun with our symposia with Johns Hopkins University and our programs with Prairie View A&M University.”

The HMAAC photography exhibit, Alonzo Williams’ Everyday Strangers, shown earlier this year, and which was part of the Fotofest global curator program, travels to the Paul R. Jones Museum at the University of Alabama in 2021.

Selected Works From The Paul R. Jones Collection of American Art is made possible through the support of The Houston Endowment, HEB and the Board of Directors of The Houston Museum of African American Culture.