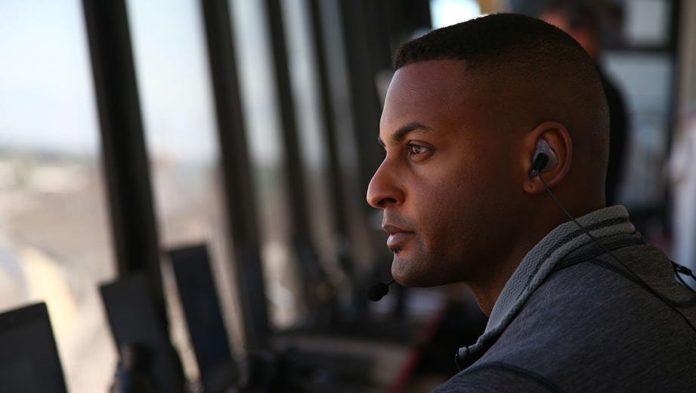 “I think this sport is open to everyone,” Hamilton said. “Like myself, if you find a passion in this sport and it’s something you enjoy, I think there’s an opportunity for everyone to come into the sport.”

Hamilton’s new gig requires that he wears a headset in the control tower high above Auto Club Speedway, where he communicates with track and race officials while overseeing everything that occurs in the race, including penalties, crashes and cleanups. He also has to make quick decisions regarding safety personnel and even emergency services.

“Having a really good understanding of racing coming in has definitely benefited me,” Hamilton said. “I’ve been observing, and I’ve been on the radio for a while now.”

“He’s younger, but he’s curious, and he probably knows as much as I do from a race procedure standpoint, having been a driver,” Cassidy said. “There are some instances where I’m going to learn from him. … I want those working close with me to know everything I know, and I think that helps our relationship quite a bit, because he’s a sponge. It’s a pleasure to work with him. A pleasure to see where he’s come from, and where he could go.”

Hamilton says he “never really thought of (being the first African-American national series race director) in those terms. … I’m proud of it, and I’m really thankful for the team in the control tower.”

“I’ve wanted to work in professional racing since I was a kid watching Kevin Harvick,’’ he added. “I’m very fortunate to have this opportunity. I’ve had the chance to learn so many different areas of the sport and business, that’s one of the things that’s best about working with NASCAR.”

“Being race director is similar to being the quarterback in football — you have to know your job and the jobs of every other team member to be successful.”