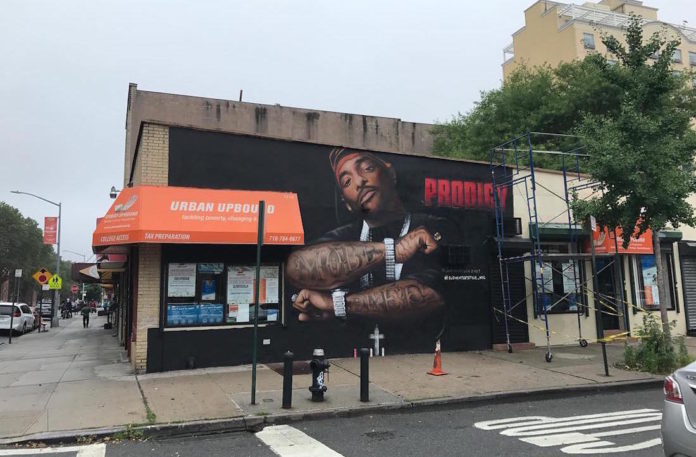 Not sure what the deal in Queensbridge is, but someone or someones may have gotten their wish to destroy a mural of recently deceased rapper Prodigy of Mobb Deep.

As reported by The Root, a mural of the rapper was vandalized with white paint over the weekend, less than 24 hours after the piece went up.

The two artists who created it, Jeff Henriquez and Eli “Eli-Eos” Lazare, on Sunday painstakingly restored the lifelike image, which had been placed across the street from the infamous projects where Prodigy grew up in Queens, N.Y.

@Regrann from @thehoneydark – Yep….Still shining DESPITE your disrespect! Now @jeffhenriquezart_ and @elementsofstyle_nyc have to redo this hard work! Blessings to everyone who was involved with creating this and F— whomever disrespected it! #prodigymural #ripprodigy #mobbdeep #mobbdeepforever #hiphop #family #love – #regrann

However, DNAinfo New York reports that by Monday, and after a 15-hour restoration, someone had splattered the mural with red paint this time. Unfortunately, the piece has since been painted over in solid black, and Lazare said he has no plans to repaint the mural.