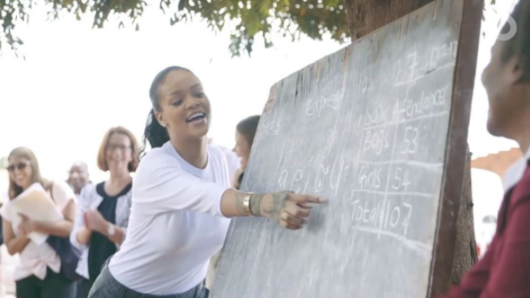 Rihanna is on a mission to give the kids of Malawi a better education.

In partnership with Global Citizen and the Global Partnership for Education, the pop star’s Clara Lionel Foundation traveled to the African country in January to gain some insight on the state of education in Malawi. Accompanied by Global Citizen CEO Hugh Evans and former Australian prime minister and current GPE chair Julia Gillard, Rihanna visited schools and met with policymakers to advocate for better education opportunities for children.

During the trip, Rihanna leads kids in a math lesson, empowers young girls with a chant and talks to educators about school needs.

“I’m really here to see it,” the singer said in the video campaign launched by Global Citizen on Wednesday. “It’s one thing to read statistics, but I want to see it firsthand and find out all that can be done and where to start first.”

The goal of the campaign is to call on world leaders to commit $3.1 billion to global education, helping the GPE provide more than 870 million children in 89 countries with a quality education between 2018 and 2020.

Malawi is one of the poorest countries in the world. Half of the population lives below the poverty line and the average income is about 90 cents a day. In the video, educators tell Rihanna that the extreme poverty rates lead students to drop out. Girls, who are usually married off at a young age, are especially at risk for dropping out.

My time in Malawi was so inspiring! Working with my @ClaraLionelFdn to improve the lives of students globally, alongside @GPforEducation… watch the clip on my YouTube —> link in bio.

In Malawi, 70 to 75 percent of all students get into primary school, but only 8 percent complete secondary school (high school), according to Angeline Murimirwa, regional executive director of girls’ education nonprofit Camfed.

In the video, Wongani Nyirenda, a 14-year-old student who aspires to become a businessman, spoke of the lack of resources and food that plague many of the country’s pupils.

“This is a beautiful school and good teachers, good learners, but there’s some lack of blocks, lack of chalk, lack of books,” he said. He added that students try to persevere by uniting: “There is importance to come together because together is powerful. So we need to sing songs, playing games like rugby also to make our bodies healthy, to make our bodies defend from disease.”

Rihanna commended the students on their creative ways of retaining knowledge, despite their schools’ conditions.

“I love that they learn in melody, that’s like my favorite thing because kids, they adopt melody really, really quickly and so, if you can use that as a learning tool, I think that’s the most brilliant, brilliant thing,” she said.

Rihanna has long been an advocate for global education. In 2012, she created a scholarship program for students from Caribbean nations attending college in the United States. In September, she called on her fans to urge Canadian Prime Minister Justin Trudeau to pledge $20 million to the Education Cannot Wait fund.