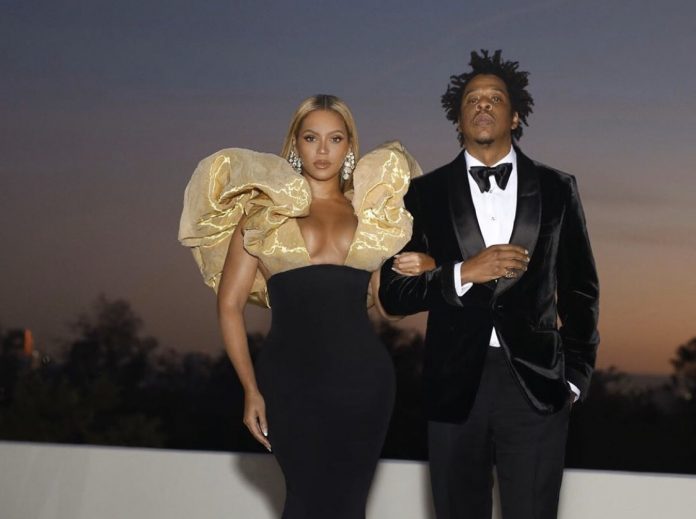 It was a blink-and-you’ll-miss-it moment, but all eyes were on Beyoncé when a camera panned over to the singer during the 2020 Golden Globes!

The “Love on Top” songstress and husband JAY-Z passed on posing for photos on the red carpet, instead heading straight into The Beverly Hilton hotel on Sunday. But fans were beyond excited to see the regal Bey, looking exquisite in a black gown with oversized and dramatic gold sleeves and a deep V. Her beauty look was glowing and her blonde locks were pin-straight and parted down the middle. She also wore drop diamond earrings.

Jay, on his end, also looked dapper in a dark velvet suit.

Fans also noticed that in one of the pics, the couple’s security is holding bottles of Armand de Brignac, as known as Ace of Spades, champagne. JAY-Z is the owner of the luxury brand.

Beyoncé’s track, “Spirit,” from The Lion King was nominated for Best Original Song. She was up against Taylor Swift’s “Beautiful Ghosts,” Elton John’s “I’m Gonna Love Me Again,” Cynthia Erivo’s “Stand Up,” and “Into the Unknown” from Frozen II.

While Bey didn’t take home the award for Best Original Song—Rocketman‘s “I’m Gonna Love Me Again” picked up the win—we’re sure the singer will land the opportunity again. The Academy Award nominations are announced January 13.