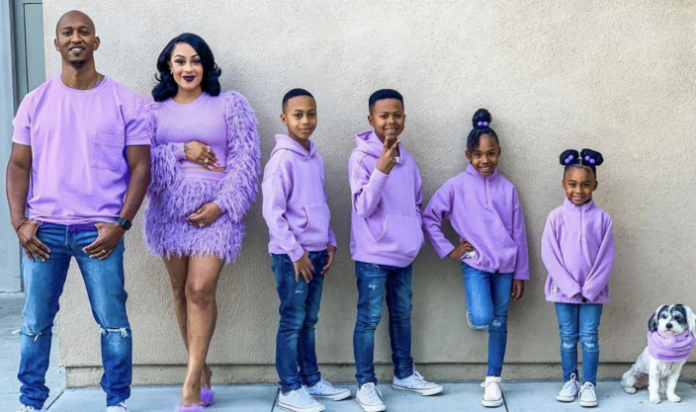 An expectant mother of four found herself having to defend criticism of her growing family.

Last Monday, Leslie Lewis took to her wildly popular Instagram page, which features pictures and videos of her family and their adventures, to address criticisms about her large brood. Pregnant with baby No. 5, Lewis revealed in her post that people were questioning how she could afford all of her children among other comments.

Lewis’ post was liked over 50,000 times and received tons of comments.

“This is definitely a ppl of color issue. No one questions white women when they have large families, hell its encouraged but ppl are always policing our brown bodies,” one person wrote.

“I go through the same thing. I have 5 kids from my HUSBAND & people still feel the need to make comments about it,” another commenter said.

So I don’t usually publicly address the Negative Nancys and Pouty Pauls that find it necessary to judge my life choices. BUT a number of ppl have been commenting and even having the nerve to send me DM’s regarding my pregnancy…“I thought y’all was done?” “How can y’all afford 5?”Listen here! I am a married, ADULT! I have one baby daddy. (This post isn’t by any means intended to shame OR offend anyone whose situation is different) I don’t appreciate getting messages about birth control and questions like “How did this happen?” SEX…sex is how it happened got damnit. 🤣 On a positive note, I feel super blessed that Joe and I work( very hard)…we are a parental UNIT, and we work hard to provide and raise good people. Lastly, when this baby comes ion want to hear who it looks like mmmmmK thanks, bye! 😂 One last thing 🗣Oreo is a GIRL 🐶 #SorryNotSorry #BlameItOnTheHormones 🤷🏽‍♀️#LeaveMeAloneShit #TheLewis’ #Denim #jeans👖 #HappyMonday #MeetTheLewisFamily #CoordiNatedFamily #SF #Influencers #growingandglowing✨ #KeepCalmWhileIBuildMyEmpire

Being an entrepreneur and social media influencer, Lewis tells Yahoo Lifestyle that she expected negative comments, but she said that a recent message about her latest pregnancy prompted her to create the post.

“The last straw was when another woman felt the need to send me really hurtful messages assuming I must be on welfare and how I should be on birth control, etc.,” she says.

With networks like TLC making millions from shows portraying large, predominately white families in a positive way, Lewis called out a double standard where large black and brown families are portrayed as broken and unable to care for their children.

“It is… common practice, even in this day, for the media to portray families of color as incapable of raising large families positively,” Lewis explains. “In reality, working families of color have historically been large in size, usually with more than 3 children.”

Lewis urges other families being shamed to not let a stranger dictate their lives and says that she hoped that sharing her story would make a positive impact.

“I have learned to use my platform to uplift families and women of color, and to use the criticism as fuel to meet and exceed my personal and family goals!” She continues, “Maybe one day we will get a reality show since there’s no families of color with multiple kids on TV that people can relate to.”