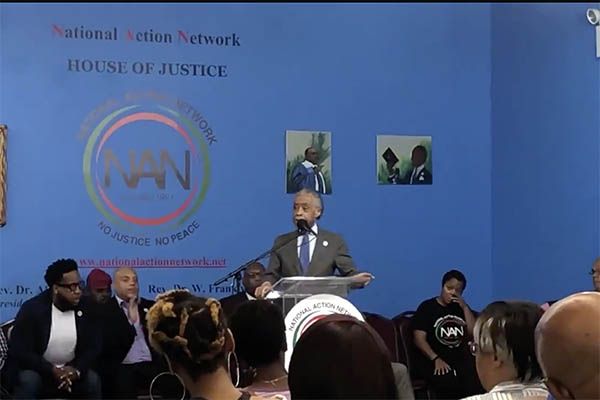 While many civil rights leaders have seemingly stayed quiet about Jay-Z’s new controversial partnership with the NFL, the Rev. Al Sharpton decidedly confronted it head-on during his weekly address at the National Action Network headquarters in Harlem on Saturday.

People have had strong opinions about the deal that gives Jay-Z’s Roc Nation company control over certain aspects of the Super Bowl halftime show and places the rapper in an as-yet undesignated role surrounding social justice issues and initiatives. But because the undoubtedly lucrative partnership’s announcement was void of any mention of Colin Kaepernick — the free agent Super Bowl quarterback whose national anthem kneeling protest is credited with bringing the widespread awareness of social justice issues and, in particular, police brutality against Black people — some folks have said in no uncertain terms that Jay-Z sold out Kaepernick. (It didn’t help matters that it was later reported that Jay-Z was expected to ultimately have a “significant ownership interest” in an NFL team.)

However, others have suggested a hurry-up-and-wait approach could be more prudent, given Jay’s documented dedication to “the cause.”

On Saturday, Sharpton suggested that the Jay-Z-NFL-Kaepernick debate was missing one key component that, if included, would put the controversy into what he said was its proper, larger context.

Sharpton, who went on to cite Tamir Rice and Michael Brown as other unarmed Black males killed by police, was referring to the absence of justice as NYPD Officer Daniel Pantaleo avoided criminal charges and has kept his high-paying job more than five years after being was recorded on video choking Garner to death in broad daylight. The reverend used that notorious police death to explain who he said should matter most in the overall social justice narrative.

“This ain’t no battle for athletes and superstars, it’s about people being trampled on,” he exclaimed. “Don’t let them distract you fighting the wrong fight!”

Sharpton went on to cite Jay-Z’s notable contributions on the social justice front. “I’m not attacking Jay-Z,” he said before emphasizing that he was more concerned with justice for Garner and other Black victims of police brutality that has gone unpunished.

Jay-Z’s social justice resume is strong. He has produced one documentary about Trayvon Martin and another about Kalief Browder, each credited for helping to bring attention to two very separate but equally tragic deaths blamed in part on law enforcement. Roc Nation has helped secure legal aid for both famous and everyday Black people. Most notably, Jay was involved in the legal saga that helped to release Meek Mill from prison last year after he spent nearly five months incarceratedafter a controversial sentence for probation violation.

Michael Eric Dyson, the scholar as well as Jay-Z’s biographer, vehemently defended Jay and his record during an appearance on CNN on Friday that incorporated some similar points Sharpton made.

Still, the rapper was being heavily criticized for saying during the partnership’s announcement that he thought kneeling was no longer the right approach to effect any real change.

Kaepernick seemed to question the partnership when he tweeted on Thursday — the day after the deal was announced — that he planned to continue “to work and stand with the people in our fight for liberation, despite those who are trying to erase the movement!” To many people, that read like a direct swipe at Jay.

Nessa, the free-agent quarterback’s girlfriend who’s been a leading voice for Team Kaepernick, later tweeted that “Jay-Z Is JUST Taking The Money.

The likely truth was that until (if?) the details of Jay-Z’s agreement with the NFL are revealed, no one really knows what his role will be or who it will truly benefit. Which is why Sharpton’s words on Saturday seemed to be the voice of reason that was missing from the ongoing argument: don’t get distracted “fighting the wrong fight!”