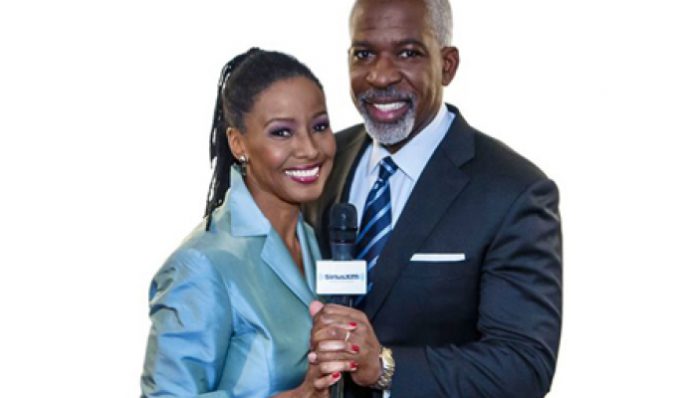 Fans of famed restaurateur and lifestyle guru B. Smith are lashing out at her husband after he and his blonde girlfriend appeared in a Washington Post profile.

Dan Gasby, 64, opened up about his relationship with the other woman; as he cares for Smith, 69, amid her ongoing battle with Alzheimer’s disease.

Gasby first went public with his romance with Alex Lerner, 53, back in December, in a post on the Facebook page he shares with his wife. He and Smith have been married to for 26 years.

“If This is Us and Modern Family came together, it would be us,” Gasby told The Post about his relationship with Lerner.

According to the report, the two met in the summer of 2017 and remained friends initially, as the divorced mother of three told The Post that she had socialized with Smith previously at charity events and “didn’t want to go out with a married man.”

But while having breakfast with Gasby and Smith one morning, Lerner realized, “This is not a man cheating on his wife.”

“What I admire about him is that he takes care of her,” she explained to The Post.

Lerner has also taken on a caregiver role. She has a room in Gasby and Smith’s East Hampton home, where she stays when she visits from her Manhattan apartment, the report states.

Smith was diagnosed with Alzheimer’s six years ago. Gasby previously told PEOPLE that taking care of her was 24/7 job.

“It’s the toughest thing I’ve ever dealt with,” he said. “Anybody who is an Alzheimer’s care giver knows exactly what other caregivers are going through. It’s 24/7. The complexity and the intensity of it is very tough.”

Caring for Smith “is overwhelming most of the time,” Gasby admitted to PEOPLE. “I’m taking it one day at a time,” he said. “It’s extremely difficult. At times I feel like I am between the Titanic and the iceberg and the water is cold and it makes a difference which one I get on.”

Meanwhile, critics of Gasby and Lerner’s relationship are not here for him embarrassing his wife, and many have noted online that: “You don’t bring your mistress in the house where your WIFE lives,” wrote one commenter, according to The Post. “She’s not dead.”

One twitter user said: “My nigga what happened to “in sickness and in health & how TF can you be Boo’d up with a man with his ill wife in the next room? Bitch!”

Another wrote: “The audacity of this muthaf*cka to bring this woman up in his wife’s house”

“The idiots and ignorant people calling for my arrest and saying B is or has ever been abused — I only wish someone in your immediate family has Alzheimer’s so you can see feel and experience the pain of millions of people across this country so you can know first hand what it’s like to care 24/7/365 for someone who can no longer care for themselves!” he wrote.

“I love my wife but I can’t let her take away my life!” he added. “5-10 years from now when many of you who will have an almost predestined meeting with Alzheimer’s because of genetics, obesity, and a myriad of inflammatory diseases, you’ll be wishing for someone to share moments with and ease the pain of loneliness and despair.”

He continued. “The clock is ticking. I know I can and have [managed] this, but can you do it too?”

Scroll up and watch the Twitter embed clip above and let us know if you agree with Loni Love’s take on the issue.

Also, here’s what the ladies of “The View” had to said about it…watch below: