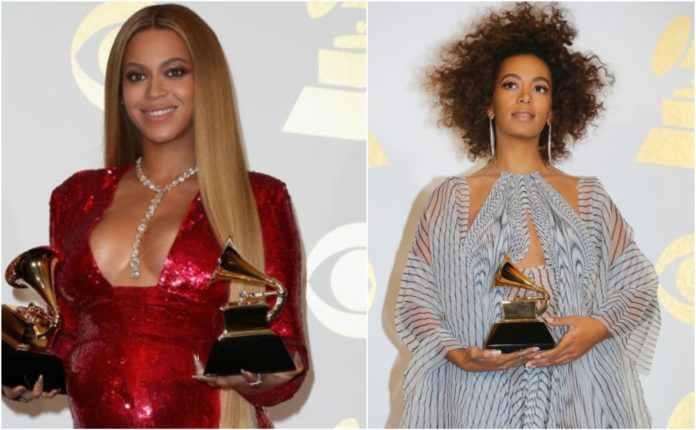 It was a family affair for Beyoncé, Solange and Tina Knowles during the 2017 Grammy Awards.

In one of the night’s most talked-about and lavish performances, Beyoncé, who is expecting twins with her husband Jay Z, sang two songs in a glittery gold gown and matching crown and choker. She was introduced by her mother.

“I’m blessed to have daughters, wonderful daughters, all of whom make me proud with everything they do,” Tina Knowles said.

“I am proud of their accomplishments, their self-confidence, and their desire to make a difference. What makes me most proud and why I’m here tonight to introduce Beyoncé is the devotion and love I see in her for her daughter and the way she has always expressed love to all of those around her.”

Beyoncé won two Grammys, one for Urban Contemporary Album (“Lemonade”) and one for Music Video (“Formation”).

“My intention for the film and album is to create a body of work that would give voice to our pain, our struggles, our doubts, and our history, to confront issues that make us uncomfortable,” she said.

“It’s important to me to show images to my children that reflect their beauty, so they can grow in a world, where they look in the mirror, first with their own families as well as in the Super Bowl, the Olympics, the White House and the Grammys and see themselves.”

Her sister Solange won an R&B Performance Grammy for “Cranes in the Sky.”

“Honestly, I feel like I won a long time ago because of all of the connectivity this album has had, particularly with Black women,” Solange said backstage in the press room.