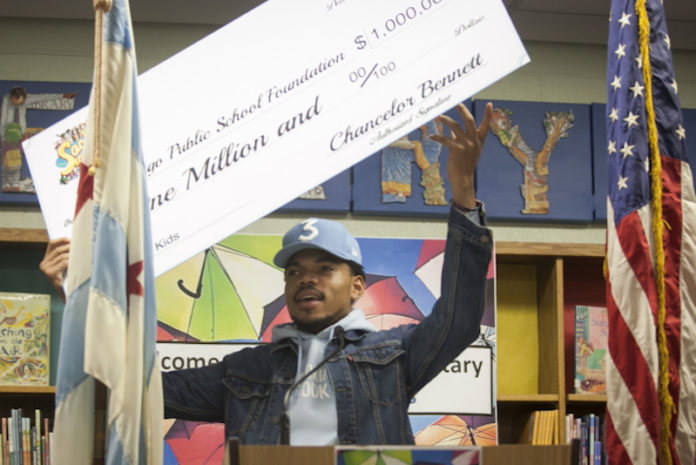 Chance the Rapper held a 2 p.m. CST news conference today to announce that he is donating $1 million to the financially-strapped Chicago Public School Foundation.

As previously reported, the rapper met with Illinois Governor Bruce Rauner on Friday about ways to fund CPS system, but the pow-wow didn’t go well, according to the artist, who told reporters afterward that the governor gave “vague answers.”

In today’s press conference at Westcott Elementary School on Chicago’s South Side, the rapper also called on other companies and corporations across Chicago — and the public — to donate to the cause.

Hours before the press event, Rauner’s staff sent out a memo with its own options to address the Chicago Public Schools’ $215 million budget gap, which is largely the result of its need to finance teacher pensions.

The memo, according to the Chicago Tribune, outlines two options for the nation’s third-largest school district to receive $215 million in pension relief Rauner vetoed last year:

The first option presented by Rauner on Monday includes passing legislation that would allow Mayor Rahm Emanuel to tap into the city’s tax increment financing funds to cover the cost. The other once again ties the money to passage of a larger overhaul of the state’s pension retirement program.

“However, given the extraordinary mismanagement of both the city and CPS budgets, legislation could be enacted to authorize a one-time mayoral transfer of $215 million from Chicago TIF funds to CPS,” wrote Michael Mahoney, Rauner’s deputy chief of staff for policy and legislative affairs.

For Rauner, the two options are a way to respond to public pressure from Chance the Rapper while also putting the onus elsewhere. The TIF district idea makes coming up with the money the problem of state lawmakers, Emanuel and potentially aldermen. The pension idea, if executed, would get Rauner a long-sought item from his legislative and economic wish list while requiring Democrats who control the General Assembly to go against their union allies who oppose the changes to the retirement system.