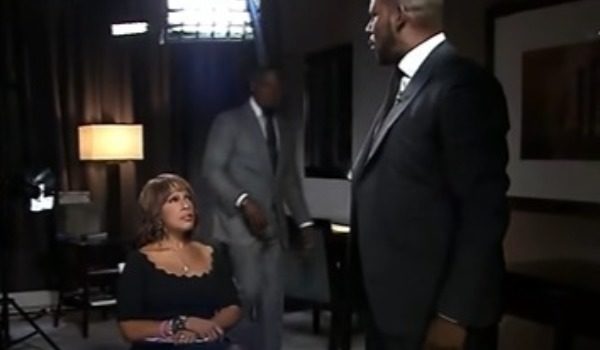 Gayle King is a accomplished journalist and TV personality, but her interview with R. Kelly in March of this year seemed to increase her celebrity.

King spoke to Kelly one month after he was slapped with 10 counts of aggravated sexual abuse, which is related to four female accusers — three who were underage when prosecutors said the alleged crimes occurred.

During King’s interview, the embattled singer completely lost his cool, which turned into various memes. And the CBS journalist kept her composure the entire time, which she received massive credit for.

“I didn’t do this stuff,” Kelly screamed into the camera then. “I’m fighting for my f–king my life.”

King stopped by Showtime’s “Desus & Mero” on Thursday and was asked what it was like to sit in front of Kelly while he lost it.

“I never thought he was going to hurt me, guys,” she explained. “But when he was doing this (pounding his hand with his fist), I thought he might accidentally hurt me, so I was worried about that.”

King then said that Kelly was spitting as he yelled, and one drop of spittle actually landed on her lip during the interview. But she decided not to move or brush it off, so she wouldn’t agitate him further.

King also believes the singer’s actions weren’t contrived and they were completely real.

“I really think that we were watching him having a breakdown in real time,” she explained. “Someone said ‘Oh, Gayle, he played you, he was just faking.’ I do not think that was fake.”

And although the Maryland native said she wasn’t scared during Kelly’s outburst, she said she would’ve been several years ago as a young journalist.

Aside from the 10 counts of sexual abuse, Kelly was also hit with 11 more felony sexual misconduct counts in May.

Kelly is currently locked up at the Metropolitan Correctional Center in Chicago, and he’s pleaded not guilty to all of the charges.