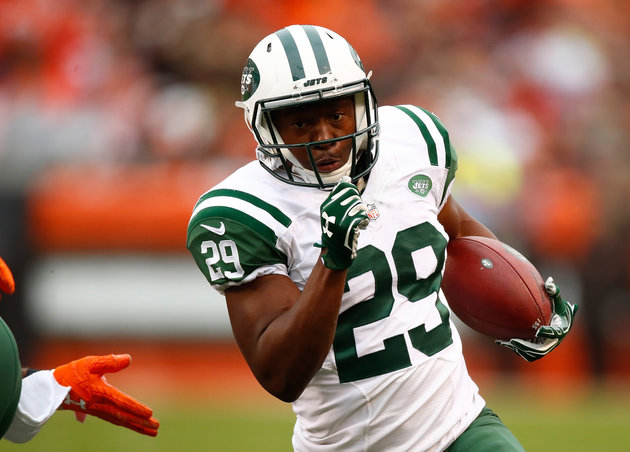 When the NFL told players this season that they could dedicate a piece of their uniforms to a cause or charity they wanted to highlight, Bilal Powell knew right away what he wanted to do.

So on Monday night, the soft-spoken New York Jets running back plans to use his cleats to send a loud message to the world: It’s time to put an end to the gun violence plaguing American communities. Gun violence is an issue that hits close to home for Powell, whether that’s in his native Lakeland, Florida; in Louisville, Kentucky, where he went to college and still has a home; or in New Jersey, where he lives during the NFL season.

“I lost a lot of friends and a family member to gun violence,” Powell told The Huffington Post by phone Saturday. “My best friend lost a bunch of family members to gun violence in the city of Louisville, and it’s pretty bad up here in New Jersey too. … You just want to do something about it.”

The NFL has long fined players, like Powell’s teammate Brandon Marshall, for using their cleats as a billboard for issues that aren’t league-sanctioned. But after years of criticism, it announced earlier this year that it would relax the policy for Week 13 of the 2016 season. As it happens, the Jets will play the Indianapolis Colts during Monday Night Football, giving Powell’s message against gun violence a national audience.

“It being a Monday night game, it was a chance to bring awareness,” he said. “We have to see what we can do to, one day, get everybody at peace and live together.”

Once he landed on gun violence prevention as the issue he wanted to highlight, Powell still had to figure out the best way to do it. For that, he turned to Scedric Moss, his former University of Louisville teammate who is now an artist based in the city. Moss was busy with his own projects. But he had also lost friends to gun violence, and he couldn’t pass up the opportunity to design Powell’s cleats.

Moss went to work, fast. The result was a pair of tricolor cleats that will be impossible to miss under the stadium’s bright lights. Each of the three colors Moss selected ― green, neon yellow and red ― symbolizes gun violence. The green, Powell said, stands for money, often a source of conflict that leads to fatal gun disputes. The yellow is for police caution tape. And the red speckles represent the blood shed in each of America’s thousands of annual gun deaths.

“He lost friends and family to the same thing, so it meant that much more to him to be a part of this,” Powell said of choosing Moss to design the shoes. “It was good timing and the right thing to do.”

On the side of each shoe, Moss also painted the outlines of two raised hands. They represent the charity Hands Across Louisville, an anti-gun violence organization in Powell’s adopted hometown. The shoes will go to auction after the game, and the proceeds will be put toward the group’s work to address the root causes of gun violence. Among other priorities, the organization wants to train local citizens in anger management and social interaction, and bolster job creation and career-training efforts,

Powell chose the Louisville charity because of the time he spent there in college. He was a standout running back for the Cardinals, amassing more than 2,600 total yards and 22 touchdowns during his four years at the university. To get there, he’d left behind a past that included, he said, a stint in a gang in Florida.

But even in in Kentucky, gun violence remained close to his life. During Powell’s sophomore year in 2008, Louisville wide receiver Trent Guy was injured in a shooting in the city. Two years later, another one of Powell’s teammates ― former Cardinals linebacker Daniel Covington ― was shot and killed in a dispute downtown.

The city where Powell now lives in the offseason and plans to retire once his career is over is still struggling with gun violence: a double homicide shooting in Louisville’s Shawnee Park on Thanksgiving Day made national news ― and pushed the city’s total number of homicides for the year to a five-decade high.

Hopefully this is something that will wake a lot of people up. What I’m trying to do Monday night is get people to open their eyes, man, and try to bring peace.

“The city of Louisville will always be in my heart,” Powell said. “You have people losing innocent lives in this. This hit home for me. I wanted to choose something that I had a connection to.”

And although he already had the cleats in the works, the issue of gun violence touched Powell’s life again this week. Former Jets running back Joe McKnight was shot and killed during an apparent traffic altercation outside of New Orleans on Thursday afternoon. Powell and McKnight were teammates for two years in New York, and the two had kept in touch, even though McKnight left the NFL and spent this past season in the Canadian Football League.

Powell’s call for an end to gun violence, then, will carry a particularly poignant and timely message Monday night.

“Joe was an amazing person. A great teammate, and an even better person,” Powell said. “That right there, it’s sad to say, that another person’s life is gone over something that probably could have been prevented. … It puts a lot of things in perspective.”

The cleats aren’t Powell’s only form of action on gun violence. After he made it to the NFL, he started The Bilal Powell Foundation to help keep children out of trouble and away from the type of violence has has experienced up close too often. It’s geared toward expanding community and education opportunities for at-risk children in the cities he’s called home.

But for a running back who usually prefers to let his performance on the field speak for him, this week, and this pair of cleats, offers a chance to broadcast his message publicly in a way he hasn’t necessarily before. Powell is excited about that opportunity, so much so that he’s even planning to make his teammates wait to see the final product in person.

“Hopefully this is something that will wake a lot of people up,” Powell said. “What I’m trying to do Monday night is get people to open their eyes, man, and try to bring peace.” 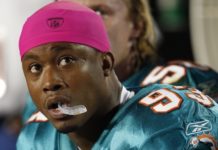 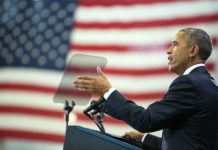 End of an era: Obama leaves legacy of hope, change 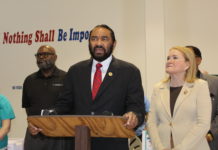