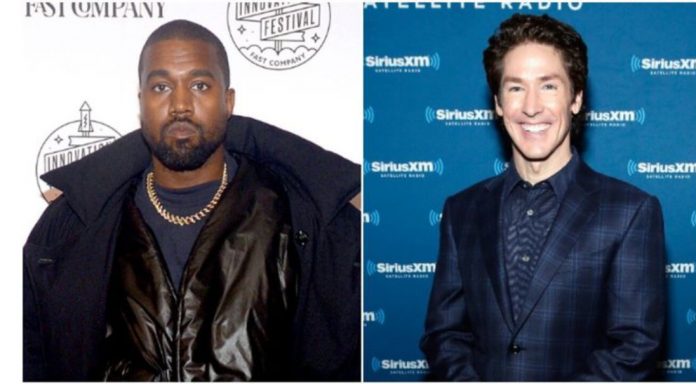 West, who released his first gospel album last month, will be having a 15-to-20-minute conversation with Osteen at Lakewood Church’s 11 a.m. service.

Lakewood spokesperson Donald Iloff Jr. said that the conversation will revolve around West’s journey to faith.

The rapper will reportedly make another appearance at the evangelical church’s 7 p.m. young adult service, this time with his Sunday Service choir.

West was already in town to perform at Travis Scott’s Astroworld Festival.

West’s new album, “Jesus Is King,” is the rapper’s first to exclusively focus on religious themes. The album debutedon Billboard’s Top 200 albums chart at No. 1.

West’s visit to Lakewood comes months after he started holding pop-up religious events across the country, sometimes at churches and accompanied by pastors. His wife, the reality star Kim Kardashian, has described these “Sunday Services” as a “musical ministry” where “they talk about Jesus and God.”

Osteen was reportedly the one who invited West to bring his Sunday Service performance to Lakewood. The pair apparently struck up a friendship through phone conversations about faith.

“Kanye and Joel are friends,” Iloff told a local newspaper. “He’s been wanting to come out for some time and it just worked out for this weekend.”

Osteen’s church draws about 45,000 members every weekend, filling out a 600,000-square-foot stadium that was formerly home to the Houston Rockets. Millions more watch Osteen’s sermons through weekly television broadcasts. The pastor regularly packs stadiums around the country during his preaching tours.

Both West and Osteen have been criticized by some Christians ― West for his support of President Donald Trump and his suggestion that slavery was a choice, and Osteen for appearing to promote the prosperity gospel, which suggeststhat God guarantees wealth and health to those who are faithful in just the right way. Osteen preaches that his own wealth ― which he attributes to book sales ― is a blessing from God.

While West’s foray into the Christian music scene has been a cause for celebration in some Christian circles,others have questioned why this support is emerging now ― especially since the rapper has been outspoken about his faith in the past.

“Only after Kanye put on the infamous MAGA hat did he become so precious to white conservatives,” Henry wrote.