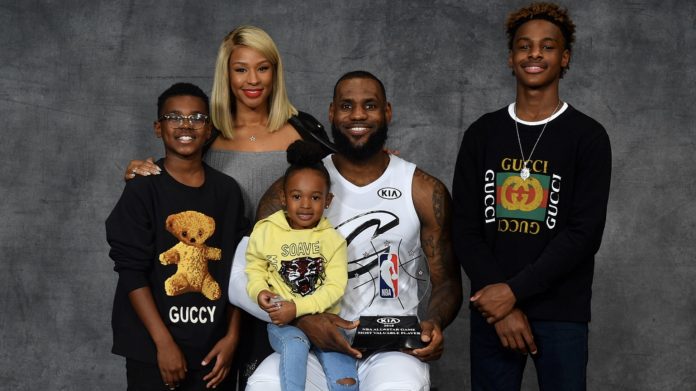 Off the court, LeBron James is an oenophile and is passing his love of wine to his sons.

James admitted he allowed his sons, 14-year-old LeBron Jr. and 11-year-old Bryce, to drink wine, reports USA Today. He is also father to three-year-old daughter Zhuri, who does not yet imbibe.

“Yeah, that’s how mature they are,” he told reporters on Tuesday. The LA Lakers’ newest star also joked the boys would be behind the wheel soon.

“They’ll be driving next week, too,” he laughed.

The 34-year-old made the confession after he revealed his sons help him keep up with pop culture.

“You know, everything that they [James’ Lakers teammates] listen to or are watching these days, my 14-year-old and my 11-year-old are watching as well,” he said.

According to Bron, the boys drink “whatever Dad’s and Mom’s having” and insisted it was his idea. “Put it on me, though. Don’t put it on Mom. Put it on Dad, put it on Dad,” James said.

The James family cracked open a bottle recently when Bron had his first glass of wine after a 15-day detox. He gave up alcohol, gluten, dairy and sugar while preparing for this year’s games, according to the Los Angeles Times. The cleanse only made his love of vino stronger.

“It made me want wine more,” he said. He also found being a parent made it difficult for him to stick to the regimen.

“That’s the discipline you gotta have when you got three kids running around the house, and they’re making sprinkled chocolate chip pancakes at 11 o’clock at night, you have to be very, very disciplined to not even indulge,” James said. “We have a dessert tray up there and then we have apples and pears.”

While solidarity can help when trying to stick to a diet, King James said he didn’t require his children to diet with him because he wants them to enjoy their childhood.

“They gotta be kids,” he said. “I was a kid, too. I let kids be kids in the household and adults be adults. When you have a regimen, you want to tap into something, that’s part of it.”

What do you think about that, Defender Nation?