Lee Daniels is a fascinating person. And while he’s been known to say things that will occasionally make you raise an eyebrow, there’s no denying that what he’s been able to accomplish in Hollywood is extraordinary.

And now that he’s sharing even more of his life story, personally, I’m even more impressed not only that he’s made it so far in a competitive industry, but also the fact that he’s still alive to tell stories, other people’s and his own.

In a recent interview with Loyola Marymount University’s School of Film & TV, Daniels revealed that there have been some very dark times in his life, starting with his childhood. Many of us heard that the scene from the first season of “Empire” where Jamal is thrown in the trash can after he walks down the stairs wearing high heels, is straight from Daniels’ own life.

Despite that moment, Daniels says he harbors no hate for his father.

Thankfully, there was someone in Daniels’ life who could see what was in store for him.

“Yet my grandmother could [accept that Daniels was gay]. And she saw greatness, and she said that I was going to have greatness far beyond hers, which was incomprehensible to me at the time,” he said. “My dad told me I was going to be nothing. [But] she says, ‘Listen, you know, you’re not like all the other guys around here. You are a fa***t.’ I said, ‘What’s that?’ And she says, ‘Don’t worry about it, but you’re going to get used to — people are going to call you that. But you have to remember, as long as you are strong, as long as you are fearless, as long as you are honest, you have nothing to worry about.’”

Still, it would be a while before Daniels was able to tap into the greatness his grandmother saw for him.

After dropping out of college, Daniels came to Los Angeles right when “AIDS hit.” Daniels said, “All my friends were dying…I was making an enormous amount of money [operating an agency for nurses.] I came from extreme poverty. I didn’t know what to do with the money, so what do you do? Houses, clothes, I don’t know. Drugs, parties, at 22-23-ish. And still directing theater. And AIDS hit. And again, it wiped away all of my friends. I had no friends. And we were all together because their parents weren’t taking them in. And we were burying each other, because most parents, 90 percent of the parents, were not taking them in.”

Daniels said the lack of information about the disease made it frightening. “We never knew whether you could drink from glasses or what it was. It was the most terrifying thing ever. And I didn’t understand why it was that I wasn’t [dead], because there were far better souls than me that were going. I thought that I needed to go. And so I descended into drugs and into sexual bathhouses to die. That I don’t have AIDS is a miracle from God. I don’t understand it. I really don’t understand it. Because I should have had HIV. Everybody else did.”

Even after surviving those very difficult times, Daniels said the hardest challenge of his life has been believing in himself.

“Learning to love myself, learning to believe in myself. You know, I only did it as a vendetta to my dad, to show him that I was going to be something,” he explained. “I mean, it was about survival, showing him, but knowing deep down that I wasn’t worthy of it. So yeah, I think that myself would be, I am my worst enemy. But, I’m learning, that’s why I’m in therapy now. And I want to do something about that, because, you know, black people don’t believe in therapy. I was like, all of a sudden I’m 57 and I’m going to therapy. That’s some heavy stuff, you know?” 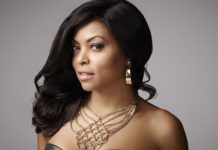 Taraji P. Henson opens up about her legacy