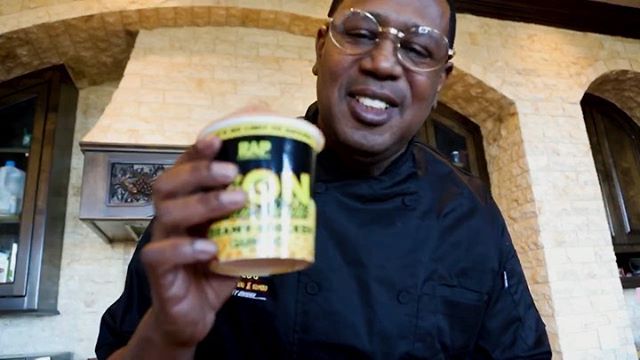 Master P has unveiled his own brand of ramen noodles with “Rap Noodles.”

Bay Area rapper E-40 is featured on the “Beef Prime Rib” noodles, Master P on the “Creamy Chicken Gumbo,” and Boosie on the “Louisiana Hot and Spicy Chicken.”

“Chef-Boy-Ar-P. I grew up on noodles now I created my own brand,” he wrote in the caption of him holding a cup of the noodles (watch above). “Start small and build. Get you some product if you want to be successful. It’s nothing like this New Orleans flavor creamy chicken and gumbo. You can cook it on the stove or you can put it in the microwave.”

Rap Snacks was founded by James Lindsay, who launched the brand in 1994 alongside Master P.

Some of the other hip-hop artists featured on the snacks include Migos (Bar-B-Quin- With My Honey chips), Cardi B (Jerk BBQ chips), Fetty Wap (Honey Jalapeño chips), Fabolous (New York Deli Cheddar chips), Trina, and Lil Yachty also have their own products.

No word yet on when exactly these instant ramen noodles will hit the store.