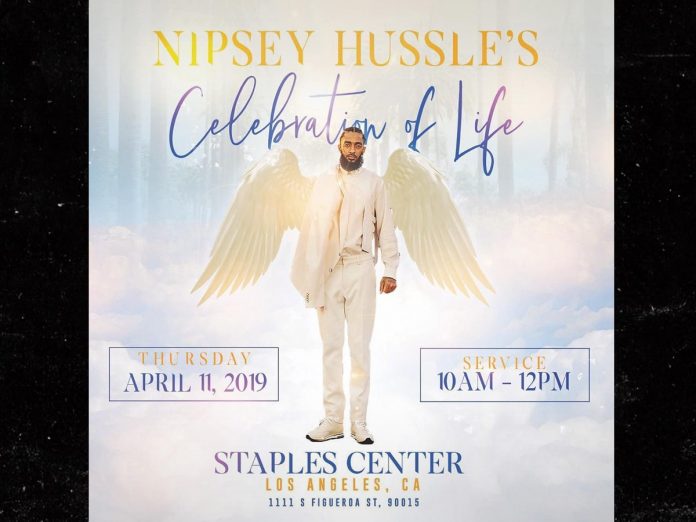 Nipsey Hussle will be getting a hero’s send-off after he was killed on March 31 in South Los Angeles.

His memorial, which is called “Nipsey Hussle’s Celebration of Life,” will take place on Thursday, April 11, 10 a.m. at Los Angeles’ Staples Center.

Tickets, which were free, were available to California residents, but they were all snapped up shortly after becoming available online at 10 a.m. on April 9. Each household was limited to four tickets.

According to the Staples Center website, attendees will not be allowed to use phones or any other recording devices once inside and may be ask to leave if they do.

Doors for the memorial service open at 8 a.m., there will be no will call, and all groups must enter the venue together.

Those unable to get tickets to the service can view Hussle’s procession afterward, which will cover 25 miles of his South L.A. neighborhood and go past his Marathon Clothing store where he was killed.

TMZ reports that Hussle’s family knew that most people wouldn’t be able to attend the memorial service, since the Staples Center only has 21,000 seats. They also wanted the community that he supported so much to have a chance to pay their respects.

The procession will be for 90 minutes, and it’ll end at a Crenshaw-area funeral home.

After Hussle’s slaying, police identified a man named Eric Holder as a suspect and quickly arrested him.

Holder is now being held on $5 million bail, and he’s been charged with one count of murder, two counts of attempted murder and one count of possession of a firearm by a felon. Two other men were also wounded during the shooting.

Since Hussle’s death, the outpouring has been huge and ongoing. On top of that, his music has been a mainstay on Los Angeles radio stations and his last album “Victory Lap” just hit the No. 2 position on Billboard.