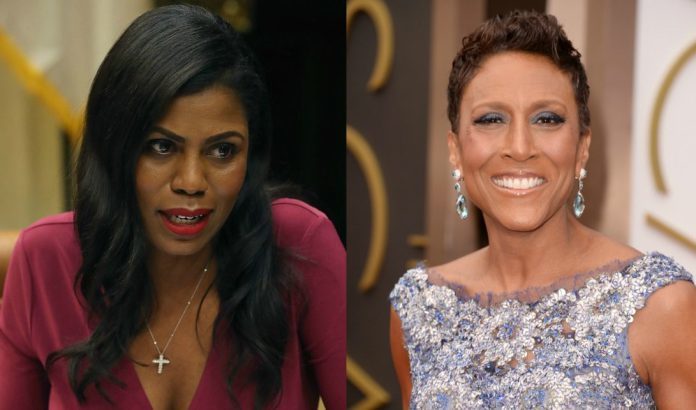 Roberts didn’t make any secret of the fact that she was glad to see Omarosa go. The beloved anchor threw a “Bye Felicia” line out on Good Morning America on Thursday that summed up the mood of most people watching the drama unfold.

But Omarosa wrote to Inside Edition to let Roberts know she didn’t appreciate the call-out.

“That was petty. It’s a black woman civil war,” she wrote.

How the shade all went down

Roberts dropped the line after Omarosa’s interview with GMA host Michael Strahan. During the interview, Omarosa suggested she’d be writing a book on her time in the White House.

“When I have a chance to tell my story, Michael, I have quite a story to tell,” Omarosa. “As the only African American woman in this White House, as a senior staff and assistant to the president, I have seen things that made me feel uncomfortable, that have upset me, that have affected me deeply an emotionally, that has affected my community and my people. And when I can tell my story, it is a profound story that I know the world will want to hear.”

But as soon as the segment was over, Roberts didn’t hesitate to share her thoughts.

“She says she has a story to tell and I’m sure she will be selling that story. Yeah. Bye, Felicia,” she said.

Omarosa left the White House in a storm of drama after Chief of Staff John Kelly sat down with her and told her that her time was up. She reportedly pitched a fit and threw out all sorts of vulgar language before she had to be escorted from the White House by security.