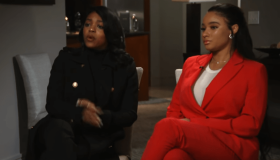 R. Kelly was arrested last week on federal sex crimes charges. There have been reports that his alleged girlfriends, Azriel Clary and Joycelyn Savage, are being held captive by his team and they were evicted from the singer’s condo. Other reports claim that parents of Savage fear the two have a suicide pact. However, they now posted a video from Trump Tower in Chicago.

In the video, which is mostly Clary talking, they say it is “fake news” that are in danger and they thank all of his fans. Watch below:

Police charged the singer in February with 10 counts of aggravated sexual abuse, after which he was arrested at least twice more on related charges.

Kelly was arrested Feb. 23 after surrendering to Chicago police following his indictment on the same day for 10 counts of aggravated criminal sexual abuse. After spending the weekend in jail because he arguably had trouble paying the $100,000 for bail, a woman friend of his posted his bond.

Kelly was taken into custody again for failing to pay more than $160,000 in child support but was released a few days later after someone else paid his bond. In addition, by May, a grand jury indicted Kelly with 11 more charges pertaining.

On the evening of July 11, he was walking his dog  and “was arrested by Homeland Security Investigations agents and NYPD Public Safety Task Force,” officials told News 4. This is his first time facing federal charges. CBS reports, “He is facing two separate federal indictments, one in northern Illinois and one in New York. The New York Eastern District was expected to file racketeering charges on Friday.” The Illinois charges are  sex trafficking, child pornography, enticement of a minor to engage in criminal sexual activity, and obstruction of justice.

One major legal problem that Kelly faces is that Illinois has no statute of limitations on sex crimes against minors. In 2017, Illinois enacted legislation that ended a requirement for child sex abuse victims to file a report within 20 years of turning 18 years old.