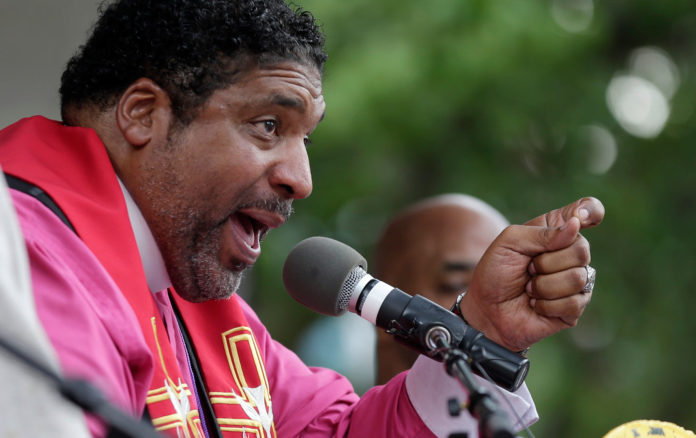 The president of North Carolina’s NAACP filed a lawsuit Wednesday against American Airlines accusing the company of kicking him off a flight in April because he is black, reports ABC News.

The Rev. William Barber, who electrified the 2016 Democratic National Convention crowd with his sermon-like speech (see below), seeks unspecified monetary damages and changes at the airline as part of his lawsuit filed in U.S. District Court in Alexandria, Virginia.

He said that being black caused his “unfair” removal from a flight that originated at DC’s Regan National Airport and was destined for Raleigh-Durham International Airport.

Barber said he asked a flight attendant to ask two white passengers who were talking loudly in the row behind him to quiet down. The white passenger responded that he had a problem with “those people” and made fun of Barber for purchasing two seats, according to the lawsuit.

Barber alleges in the lawsuit that the confrontation had dissipated when police officers boarded the plane and had him removed at American’s request. The white passenger was allowed to remain on board.

According to the lawsuit, a black American employee who rebooked Barber on a flight the next day told Barber that “this tends to happen a lot” and expressed frustration with the airline.

The airline declined comment Thursday, citing the ongoing litigation, but said it does not tolerate discrimination.

Rev. Barber is also the organizer of a progressive protest movement in North Carolina known as “Moral Mondays.”