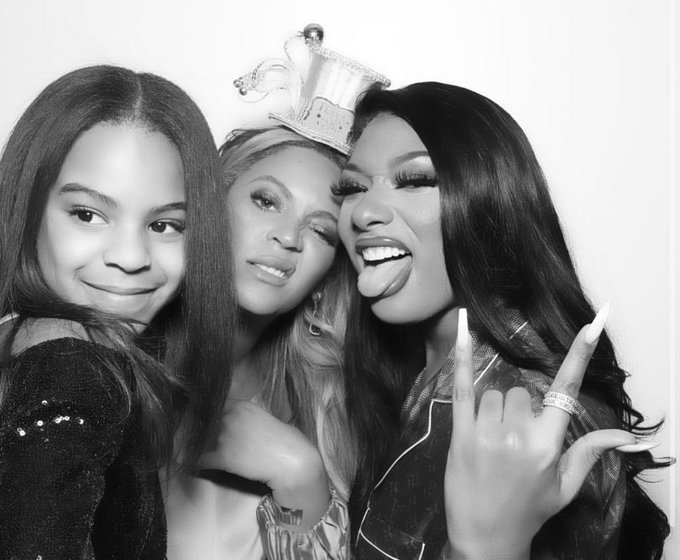 It’s 2020 and children still aren’t off limits? It looks like two writers are learning a hard lesson after taking to social media to make tactless comments about Beyoncé and JAY-Z’s 7-year-old daughter, Blue Ivy Carter. It all started when Houston rapper Megan Thee Stallion uploaded a photo of herself alongside Beyoncé and Blue on New Year’s Eve. The black-and-white photo quickly became the talk of Twitter and Instagram, but shortly after, Vanity Fair film critic K. Austin Collins made a comment that immediately placed him on the chopping block.

“I have a feeling the jay z face genes are about to really hit Blue Ivy and I feel so sorry for her,” he said in the since-deleted tweet.

Actually, another journalist from Harper’s magazine chimed in on the distasteful attack on the 7-year-old, suggesting that she will turn to plastic surgery to alter her looks when she gets older – also comparing her to Kylie Jenner.

In case anyone is confused about why people are upset @melvillmatic insults Blue Ivy (a child!) & then @unbuttonmyeyes replies with a crack about plastic surgery. Now he works for @VanityFair & she works @Harpers in case you ever wondered about media influence & misogynoir

There’s nothing harmless about insulting a child’s features regardless of whether that child has famous parents or not. There’s no value in colorism, anti-blackness or attempting to pretend that class is a justification for targeting a 7 year old with insults.3,0715:49 PM – Jan 1, 2020Twitter Ads info and privacy667 people are talking about this

“Or she’ll just get plastic surgery at 16 a la Kylie Jenner and we’ll all have to pretend that she always looked that way. I can’t allow myself to feel too sorry for the incredibly rich,” Violet Lucca wrote. She has deleted her tweet as well.

The tweets are no longer available on either writers’ social media, and instead have been replaced by meager apologies.

This the type of @AriLennox was referencing when she talk about how Some black men and women destroy the confidence of our full Black children when we should be uplifting and loving them. All skin folks ain’t kin folks.478:19 PM – Jan 1, 2020Twitter Ads info and privacySee Renee’s other Tweets

“I’m sorry about the Blue Ivy tweet — bad joke, and black girls in particular deserve better,” said Collins, which was a rather underwhelming attempt at assuming accountability. Meanwhile, Lucca insisted that her tweet was “petty,” when she tried to recant her statement. She said, “…Children of famous ought to be off limits, but time and again they haven’t been. So I said something petty and have been called ugly, old, and a racist.”

Lucca added, “I’m not playing the victim…sorry that I insulted Beyoncé’s daughter by suggesting that she might get plastic surgery some day, like many children of famous people do.” In a follow-up tweet, she also said, “I’m truly sorry to anyone who was reminded of past hurt because of my comments. I truly believe Blue Ivy will go to the grave without knowing who I am, which is neither here nor there, but on the off chance she sees it—I’m sorry, young lady. You’re gonna go far no matter what.”

you don’t get to play victim here. it was more than “petty” it was antiblack and violent to talk about a CHILD that way. so yeah, being called racist when you’re perpetuating racist ideals is the least of your issues here. reflect on that. https://twitter.com/unbuttonmyeyes/status/1212523323948752901 …Violet Lucca@unbuttonmyeyesReplying to @LiveNudeJuliaSorry I was cleaning my apartment while this blew up…children of famous ought to be off limits, but time and again they haven’t been. So I said something petty and have been called ugly, old, and a racist.

I’m not playing the victim…sorry that I insulted Beyoncé’s daughter by suggesting that she might get plastic surgery some day, like many children of famous people do.166:05 PM – Jan 1, 2020Twitter Ads info and privacy186 people are talking about this

Despite these writers deleting their tweets, it should pretty much be assumed that social media is a place where your words are immortal, thanks to screenshots. Not only are Collins and Lucca the center of much-warranted backlash, but folks are also calling for their firing.

Sorry? Hardly. Joke? LMAO. Kiki-ing back and forth with your White friend about a little Black girls looks doesn’t sound “sorry”. And if you know “Black girls deserve better”, you would have never said that shit to begin with.

One Twitter user called Collins out for enabling Lucca, who is a white woman, to make her crass comment. “Don’t want to pile on here but your exchange with ‪@unbuttonmyeyes seems to have given her permission to insult a young black girl who can’t control her features or who her parents are. She continues to double down on it. Maybe have a talk with your pal there,” the person wrote.

Another person stated plainly, “It was not a bad joke and I have already sent an email to one of your employers. Hopefully you will be fired soon.”

A third user expressed their hopes that Lucca is replaced at Harper’s magazine by a Black woman, writing, “I hope you get Replaced by a Black Woman.”

It should go without saying that attacks on children, their features and their hair is neither a joke, nor will it be tolerated. It is deplorable – period.