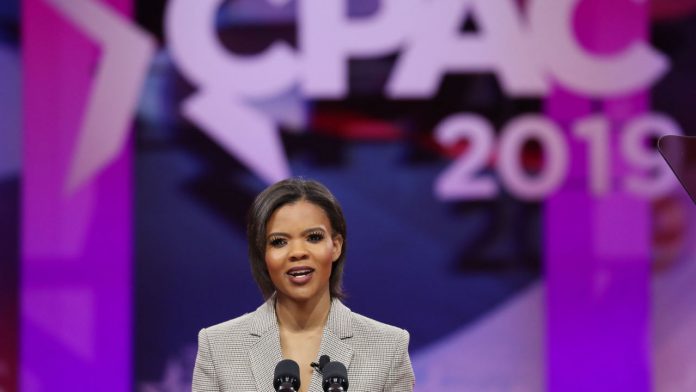 Candace Owens hit a roadblock at this weekend’s Revolt Summit when she sat on a panel with rapper T.I., who is known for his political savviness and not standing for foolishness.

The two soon clashed during the panel, which featured other speakers, as the conversation turned to Trump’s racist campaign slogan, ‘Make America Great Again.’ T.I. took the time to ask Owens, a huge Trump supporter, a pointed question that many activists and advocates have been asking since Trump declared his candidacy:

When, exactly, has America ever been great?

“That was Ronald Reagan’s slogan. Was it racist when Ronald Reagan had it?” Owens asked, trying to deflect from the real question.

“Yes,” he said emphatically, before declaring he had a question.

“Please answer this,” Tip told Owens. “When you say ‘Make America Great Again,’ which period are we talking about? The period when women couldn’t vote, the period when we were hanging from trees, or the crack era? Which period in America are you trying to make America like again?” T.I. and Candace Owens Spar At Revolt SummitIn this edition of In My Feed, we take a look at the heated conversation between Candace Owens and TI that got the internet buzzing.Share

Again, Tip isn’t known for letting stuff slide by, so he quickly cut Owens off.

“No, that wasn’t the question,” he insisted. “Which period was America great that we’re trying to replicate? Which era was it, tell me.”

“I’ll answer your question,” Owens said, while still not answering the question.

“Here’s the thing that you guys are forgetting,” Owens starts again with another deflection. “America was actually one of the first…slavery was all over the world…”

We have no idea what she was about to say, certainly she wasn’t about to insist that America was one of the first countries to end slavery…which is not only dangerously false but had nothing to do with T.I.’s question.

Alas, the rapper cut her off again, and when Owens asked T.I. and the crowd why they wouldn’t let her finish her “point,” he explained to her, “because you’re making light of the enslavement of people that look like us.”

“That ain’t nothing you breeze over,” he added.

“How am I making light of anything?” Owens demanded.

“You started with some bullshit,” Tip succinctly quipped as the crowd broke into raucous cheers.

And that, folks, is why you don’t come for T.I., he stays ready, says what he means and doesn’t have time for nonsense.