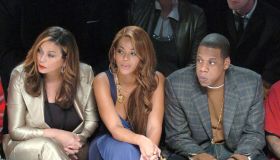 partnership with the NFL still has folks talking and his mother-in-law Miss Tina Knowles has something to say. She dropped a few words on Instagram.

Miss Tina posted on Instagram an image of Michael Moore on MSNBC with text that read, “Meanwhile Jay Z been sending millions of cases of water to Flint and not even saying a word about it. What have these Twitter woke bluechemarks done?”

In case you missed it, the Brooklyn native met with NFL Commissioner Roger Goodell and said we are beyond kneeling and it’s time for “actionable items.”

Now it is being reported that the rapper will be part owner of an NFL team.

Eric Reid blasted Jay-Z, saying, “Jay-Z claimed to be a supporter of Colin, wore his jersey, told people not to perform at the Super Bowl because of the treatment the NFL did to Colin. And now he’s going to be a part owner … It’s kind of despicable.”

He also said, “He’s capitalized on this situation. Nobody to my knowledge talked about social justice before Colin started protesting. That was not a topic of the NFL off the field. For Jay-Z to come in and partner to address social justice, do it behind Colin’s back, get paid to do it … I don’t have words.”

Last week, Colin Kaepernick marked the third year of his kneeling protest during the playing of the national anthem with a social media post of his own saying in no uncertain terms that he would continue “to work and stand with the people in our fight for liberation, despite those who are trying to erase the movement!”

Jay has also been slammed by Jemele Hill, Dr. Cornell W. Brooks, the former president of the NAACP, and many more. Many have accused the rapper of selling out, especially since he once wore his jersey and allegedly told Travis Scott not to perform at the Superbowl.

Kaep has not made any direct comments about Jay.