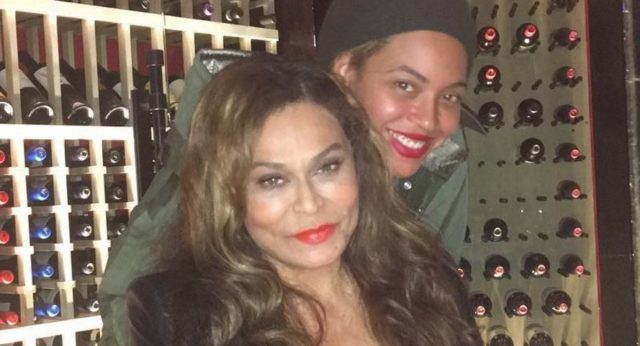 Tina Knowles Lawson has opened up about her new grandchildren and how her daughter Beyonce is adjusting to having twins in the home.

“They’re doing great. They are absolutely beautiful and so much fun,” Tina said of Rumi and Sir Carter, who were born last June. “I mean, I haven’t ever been around twins, but it’s so cute, I can hardly take it.

“It’s just really, really different with two babies. I mean, a boy and a girl,” she went on to say. “Very different personalities.”

She also says that Blue Ivy is a “good” big sister. “Just seeing her grow up, it’s bringing some maturity,” Tina’s husband, Richard Lawson added. “She’s only five, but you can see the transition in terms of her being a little more calm. Because she’s the diva,” he said, “but she’s sharing her diva-dom.”

The couple also spoke of Jay-Z’s penchant for collecting art. “We have a great passion for art and we talk about it all the time and he shows me new artists and sometimes I show him new artists,” Tina said. “He has a great eye.”

Tina and Richard are currently putting their love of art to work in a new art gallery at the Where Art Can Occur Theater. The first artist they will feature is Richard’s mentor, Milton Katselas. Profits from the art sold will go towards helping support their mentorship program for underserved communities and emerging young artists.

“My career as an artist began with [Milton] and expanded with him, so his artwork is in here and it’s an homage to him,” Richard said. “It’s an homage to a writer and a producer and an artist who was influential in terms of my career, and I’m standing on their shoulders, so I’m just giving my respect to that.”