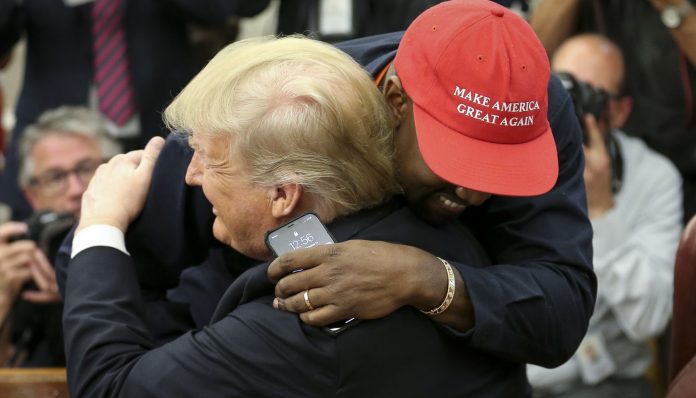 Is Kanye West putting his MAGA hat back in the closet? The 41-year-old rapper announced Tuesday on Twitter he’s “distancing” himself from politics and “completely focusing on being creative!!!”

West’s message comes amid backlash he’s facing over his supposed involvement in the “Blexit” movement. “Blexit,” short for “black exit,” encourages African-Americans who support the Democratic Party to become Republican. On Twitter, he denied Candace Owens’s claim he designed the Blexit shirts touted at this past weekend’s Turning Point USA’s Young Black Leadership Summit in Washington, D.C. West tweeted he simply introduced Owens to the person who made the logo.

“I never wanted any association with Blexit. I have nothing to do with it,” he shared.

On Saturday, Owens praised West, telling conference goers he “has taken one of the boldest steps in America to open a conversation we have needed to have.”

“Blexit is a renaissance, and I am blessed to say that this logo, these colors, were created by my dear friend and fellow superhero Kanye West,” she said of the shirts.

Owens and West, both avid supporters of President Trump, have bonded in recent months.

On Monday, she walked back on his involvement.

However, West is not “distancing” himself from the president. Kim Kardashian’s husband contacted TMZ after they ran a story with the initial headline, “Kanye West: I’ve Been Used!!! Breaks From Trump.” (The outlet later changed “Trump” to “Politics.”) The performer wanted to “make it clear he did not mention Donald Trump in his tweets, and he’s getting out of politics altogether.” As for being “used” he was referring specifically to Blexit.

The “Yikes” rapper thanked his family “for supporting my ACTUAL beliefs and my vision for a better world.”

Over the weekend, Kardashian explained to Van Jones why she always stands by her husband, despite her differing political beliefs.

“Look, I always say this: It takes him about four years to write a song to communicate what he wants to say. So when he tweets something in two seconds — what’s going on in his mind, and what he thinks and what he’s trying to say — he might not be the best communicator but he has the best heart and I know what he means,” she said on The Messy Truth. “I believe in him, and I believe that his message of what the hat represents to him is maybe different [than] what it represents to other people. He is very mindful about that. … Maybe [he] doesn’t express that. But what it means to him is something totally different, and I trust in him that he will explain that in his own way.”

The Keeping Up With the Kardashians star also fired back at those who criticized her for not pulling West off stage during his political rant at Saturday Night Live.

“What did you want me to do? Get up on stage and sing? Like what did you want me to do?” she said. “I listen to him. Afterwards, I might let him know that I can help him communicate that a little bit better and, you know, we should work on that. And he’s like ‘Oh yeah but I already tweeted it’ and I’m like ‘Well, what you tweeted isn’t what you just said to me over the phone.’ But sometimes people don’t have the long time to really hear him out and see what he has to say.”