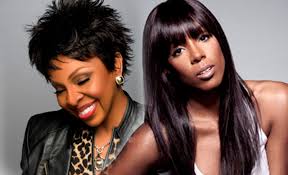 Kelly Rowland will be playing musical icon Gladys Knight in a new BET series. The series, “American Soul” will take viewers on the journey of the rise of the hit 70s show “Soul Train.” Knight was one of the first acts booked on the hit show.

According to Billboard Rowland and Kelly Price are set to be apart of the cast. Rowland will be showing off her singing skills as she prepares to record an original version of Knight’s “Midnight Train to Georgia.”

Many fans have drawn a comparison between Rowland and Knight’s looks. Back in 2016, Knight herself asked her fan on Instagram if they would like the Destiny’s Child singer to play her in a biopic. Her caption said, “It’s no secret that I love my @kellyrowland So many people have said that Kelly would be the perfect person to star in my biopic. What do you think, #Knights?!

Many fans, of course, agreed the two singers resembled each other.

“Yes ms. Knight Kelly would be perfect or Paris Bennett.”

“Kelly couldn’t be more honored, both of you are an incredible talented classy women.”

“Perfect! She could do it she can act”

“Kelly is an outstanding choice!!”

The 10-episode series will follow the life of the shows creator, Don Cornelius, and the impact “Soul Train’ has had on American music.