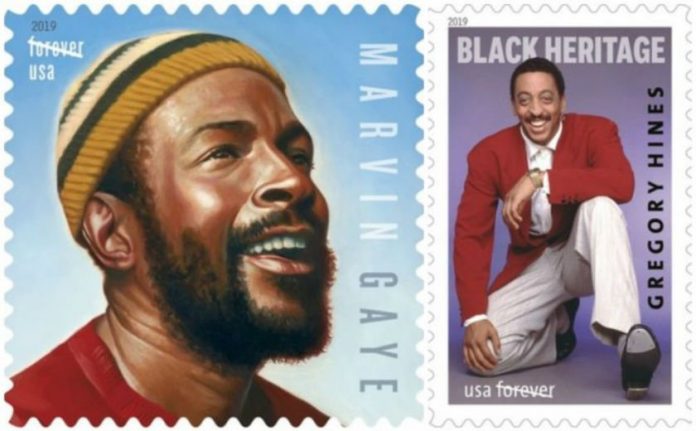 The late actor and dancer Gregory Hines and legendary singer Marvin Gaye both left indelible marks on the entertainment and music industry respectively. To pay homage to their legacies, the U.S. Postal Service announced that the two would be a part of it’s 2019 Forever stamp collection, the Philadelphia Tribunereported.

Gaye’s stamp will be a part of the Music Icon collection, the news outlet writes. The imagery for the stamp was created by artist Kadir Nelson who is best known for creating album covers for Drake and Michael Jackson and cover art for several issues of The New Yorker. Ron Brewington, an executive at the Motown Alumni Association, was instrumental in leading the effort to have Gaye featured on the stamp. Five years ago, he launched a campaign called “A Stamp for Marvin” and garnered the support of the Los Angeles City Council, the Los Angeles County Board of Supervisors, and several celebrities.

Gregory Hines’ stamp will be included in the Black Heritage collection. The inspiration for the image will be a 1988 photo of the actor. The U.S. Postal Service credited Hines for bringing “new artistry and excitement into a traditional American form” through his tap dancing and developing “the entertainment traditions of tap into an art form for a younger generation.” Other stamps that will be included in the collection will commemorate Woodstock and feature different elements of nature.

“The miniature works of art illustrated in the 2019 stamp program offer something for everyone’s interest about American history and culture,” U.S. Postal Service Stamp Services Executive Director Mary-Anne Penner said in a statement. “From legendary poet Walt Whitman to the entertainment genius of Gregory Hines to the majestic beauty of our Wild and Scenic Rivers, this program is diverse and wide-ranging and tells America’s story on stamps.”

Hines and Gaye’s stamps come nearly 78 years after the first Black person appeared on a U.S. postage stamp. On April 7, 1940, educator and author Booker T. Washington became the first African-American to be featured on a stamp.