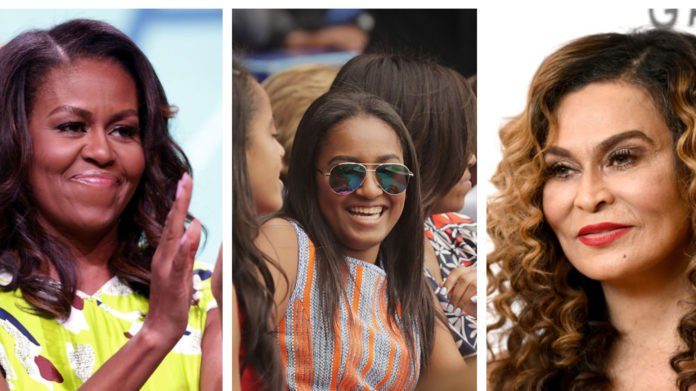 While Barack’s away, Michelle will play.

Earlier, TheGrio.com reported that former President Barack Obama is traveling through Africa – his first trip to the continent since leaving the White House. And now, we’re learning that the former first lady is not exactly pining away in his absence. In fact, here are some hints at what she’s doing: Paris, Beyoncé, Jay-Z, live music.

Michelle Obama has been spotted hanging out with Beyonce’s mom, Tina Knowles Lawson, at the Paris show of Beyonce and Jay-Z’s On the Run II tour at the Stade de France, Elle is reporting.

In one Twitter photo, Mrs. Obama is shown in a flowing white jacket, shorts and hoop earrings, appearing to be clapping her hands. Next to her is Tina Knowles Lawson decked out in red and white. Sasha Obama was there too, according to Elle.

In an Instagram video posted on Instagram by @beyonceaccess , Tina Knowles Lawson and Michelle Obama are seen jamming right behind the stage while Jay-Z raps, Michelle Obama’s outfit showing off the former first legs.

TMZ.com reports that the Obamas share a close relationship with the Carters.

Back in 2014, Michelle Obama brought daughters Sasha and Malia with her to a Beyonce and Jay-Z concert in Chicago.

Twitter went crazy over the Obama and Mama Knowles appearances. Poor @panda_pri94 will probably never be the same, tweeting in all caps, “OMG THE OBAMAS ARE HERE IN THE SUITE BEHIND ME OMG ITS MICHELE OBAMA AT A BEYONCE CONCERT OMG.”

And @celebsinparis tweeted the Obamas’ appearance in French, making the whole situation sound cool in a French way.

Tweeted @BeeBabs at the photo of both moms dancing behind the stage, “This is such an elite cool mom picture. Omg I feel so blessed looking at it.”