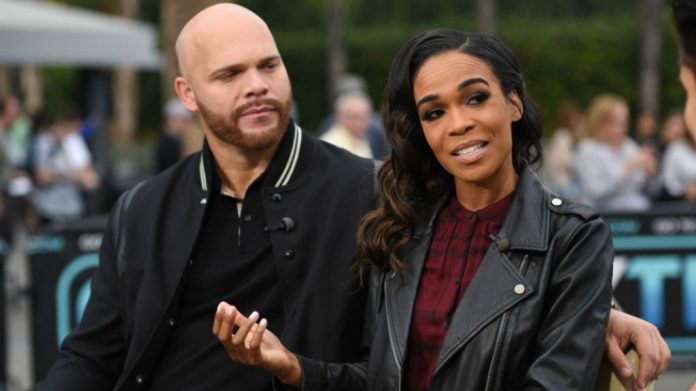 Chad Johnson liked it, so he decided to put a ring on Michelle Williams’ finger, thus Chad Loves Michelle was born on the OWN Network.

The series that follows a member of one of the greatest girl groups in history and a former pastor details the love of an interracial couple as we get a behind-the-scenes look at their journey to the altar.

Recently, we sat down with the newly engaged couple to talk about their love and the two were presumably down like Brandy when it came to their relationship. They did cute things like finish each other’s sentences and their chemistry could be felt all throughout the room. It gave everyone a warm and fuzzy feeling. That feeling could have also been hunger pains, but we’re going to go with warm and fuzzy for 500, Alex.

In the latest episode of Chad Loves Michelle, the two get into an argument involving race, and Chad said some shit that was way out of line involving Michelle’s mental health. The argument ensued when Chad and Michelle’s therapist asked them how they were communicating and Michelle explained that it all went left when she stated, “Chad, you might not understand why I communicate the way I do, because you’re not black.” Williams continues to say that this statement was offensive to her fiancé.

During the episode #TwitterFingers were ablaze and folks had a field day commenting on Chad’s reaction.

Some believe there was absolutely nothing false about Michelle’s statement. If you did not grow up around a plethora of black people, then the way we communicate/govern ourselves would be lost on you.

Unfortunately, Chad didn’t take that moment as a teachable experience and asked Michelle if she took her medication. He states that he did so out of anger and that such statements shouldn’t be made whether you’re black, white or green.

Here’s the black ass bottom line—Michelle Williams isn’t afforded the privilege of avoiding seeing color. Arguments about race are warranted and healthy discussions are needed in any interracial relationship so that both parties can be aware of each other’s cultural differences. What is not lost on me is that the two are having this conversation with their therapist, so they’re taking steps in the right direction to deal with the issue of race.

“Race is an uncomfortable thing that Chad and I don’t like to talk about, but we’ve learned that we have to talk about it,” said Williams.

During the same episode, the two sat down with another interracial coupleto get their wisdom and perspective on race. The other couple reiterated that we can’t deny racism anymore and that we have to call a thing a thing. They shared that their talks on race have brought them closer together and that it has given them each a deeper appreciation for the other.

I type all of this to basically say that you cannot ignore the issues of race that your partner faces if you are in an interracial relationship. You have to learn the importance of everything down to who brings the potato salad to the cookout. Black people are not afforded the privilege not to see race, so as a white person you have to remove your privilege to actually hear their side and reach a point of mutual understanding.