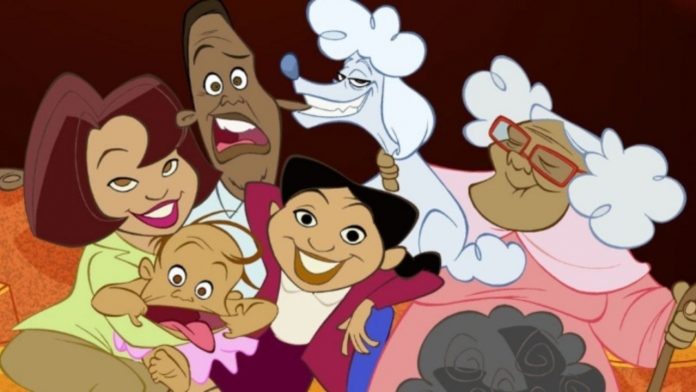 Disney’s The Proud Family, an animated show depicting a Black family, is being revived.

Jo Marie Payton, who starred as Suga Mama in the show from 2001-2005, told Good Morning America’s third hour co-host Keke Palmer that she is gearing up for the show’s revival next year on Disney+. On Tuesday’s episode of GMA3, Payton said Suga Mama is “still large and in charge. That’s all I’ve got to say — except for Suga Mama will be doing some new episodes come February,” according to Deadline.

Back in August, Tommy Davidson first tipped us off that a revival for The Proud Family was in the works. He told @WhereIsTheBuzzTV that Disney+ would revive the series, but then we didn’t hear anything further for three whole months. Davidson played Oscar Proud on the show.

The show was created by Bruce W. Smith, and was one of only a few animated series at the time to feature an animated, middle-class Black family as main characters. The story’s main character, Penny Proud, voiced by Kyla Pratt, led us on fun adventures with a lineup of memorable characters who were Penny’s family and friends. Other characters include Paula Jai Parker as Trudy, Alisa Reyes as LaCienega Boulevardez, Karen Malina White as Dijonay, Orlando Brown as Sticky Webb, Soleil Moon Frye as Zoey and Tara Strong as twins Bebe/Cece and Puff the Poodle.

Looks like Disney+ is revamping several of its popular old shows. Lizzie McGuire is another show being revised and will re-air with most of its original cast, according to TheWrap.

Although a Disney+ rep has so far not confirmed this news, over the summer, Disney announced that Smith was one of 17 people who had inked a deal with Disney Television Animation, according to Cartoon Brew.