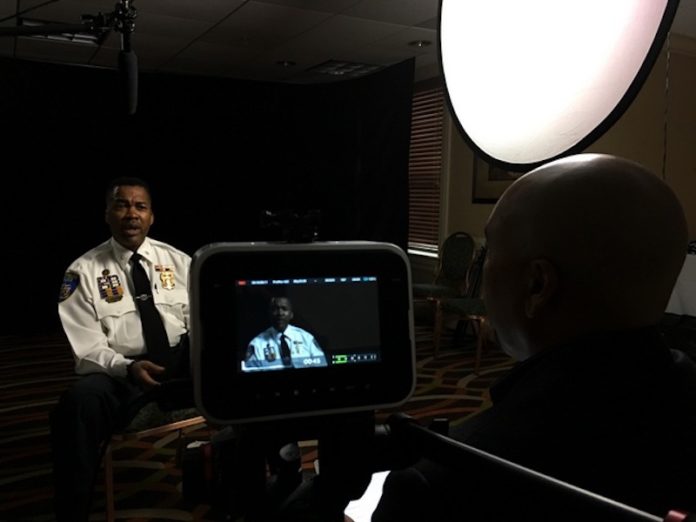 It was June 2012 when A.J. Ali was stopped by police in Howard County, Md., simply, he said, for “walking while Black.” It was the sort of commonplace experience shared by Black men and boys throughout the United States; the sort of racially-based profiling that has spawned nationwide protest, civil unrest and the birth of the Black Lives Matter movement.

Academy Award-winning cinematographer Errol Webber could attest to the same.

“Being a Black person, there were times when I was harangued by police just because of who I am,” he told the AFRO.

Together, the men decided to do something about it, making a documentary that examines racial profiling by police and ways to bridge the gap between law enforcement and their communities. Thus their documentary “Walking While Black” was created.

“This isn’t like other films that talks about the problem and people eat popcorn, feel edified and walk out,” Webber said. “This film dedicates a majority of its time to providing solutions to racial profiling.”

According to the film, which is set to make its red carpet world premiere on Feb. 1 in Santa Monica, Calif., the answer lies with L.O.V.E.

“Love is the answer,” Chief Melvin Russell, who heads the Community Collaboration Division of the Baltimore Police Department, told the AFRO. But, he added, “People don’t associate ‘love’ with policing. . . . Police are seen as anything but loving; people look at police as demons.”

Russell was one of several peace officers, faith leaders, educators, government officials, activists and others who were interviewed for “Walking While Black: L.O.V.E. Is The Answer.” L.O.V.E. is an acronym for: LEARN about the community you serve, OPEN your heart to the people in it, VOLUNTEER yourself to be part of the solution in their lives, and EMPOWER others to do the same.

“We need to change the culture,” said Russell, who retooled the BPD’s chaplaincy program and said more officers need to focus on being “servants” and not just “protectors.”

“It is long past time we got back to being partners with our communities,” he added. “No longer can we just stay in our patrol cars and answer calls.”

But the documentary is not one-sided in its portrayal of the issue, the producers said.

Ali said they held a private screening at the RAND Corp. (an American-based global policy think tank) before a group that included law enforcement officials, and several of the police officers approached him with tears in the eyes, thanking him for doing the film.

“The vast majority of police officers out there feel like they’re caught in the middle when they’re just trying to do the right thing,” Ali said in an interview.

The filmmakers said in promoting the documentary they are not going the traditional theater route. Instead, they are screening the film directly to audiences that need it most from February through April. During February, for example, the filmmakers said they are slated to host screenings at several sites throughout Baltimore, which saw violent unrest in April 2015 after a young Black man died while in police custody.

“I really believe that when we learn to respect each other, we’ll love each other because love is the answer,” says Baltimore Mayor Catherine Pugh in a clip from the documentary. “It really is about how we communicate with each other. And I tell people it’s never about what you look like, it’s never about the color of your skin, it’s never about your religious background, it’s about learning that as much as we’re different, we’re very much the same.”

For more information about “Walking While Black: L.O.V.E. is the Answer,” visit: walkingwhileblackthemovie.com