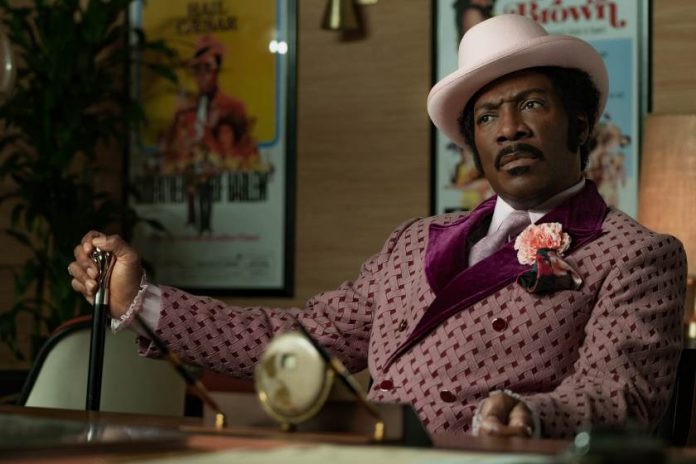 Until recently, Eddie Murphy had only made two films in the past eight years.

“I was tired,” said Murphy, who consistently churned out blockbusters in the ’80s and ’90s. After receiving the coveted Mark Twain Prize for American Humor, the 58-year-old started rethinking things.

Murphy was all on board when he received the opportunity to develop the story of Rudy Ray Moore, a trailblazing comedian who created one of the more bizarre personas of the blaxploitation era: Dolemite, an expletive-spewing pimp character Moore invented as a comic and brought to the big screen in 1975.

“Dolemite,” the movie, was made for very little money, starred many of Moore’s pals, and was written off as a total mess by critics. but it somehow spawned sequels and became a cult phenomenon for its raunchy ghetto humor and brazen tackiness.

“Richard Pryor is the ceiling of the art of being funny, and this [guy] is the whole other side of the spectrum,” said Murphy, who blames the 2002 misfire “The Adventures of Pluto Nash” –“or some s*** like that” – for keeping his plans to make a Moore biopic in 15 years of development hell.

Netflix eventually came to Murphy’s rescue, and the result, “Dolemite Is My Name,” is now available to stream on Oct. 25. As producer and star, Murphy is surrounded by a cast that includes Wesley Snipes, Da’Vine Joy Randolph, Keegan-Michael Key, Craig Robinson, Tituss Burgess, Snoop Dogg and Luenell.

As Murphy launched his own successful career as a stand-up comic and movie star, he’d listen to Moore’s raunchy, X-rated “party albums” with friends and frequently screen Moore’s 1970s action-comedy films. He knew the lines by heart. Later, he would meet and get to know Moore before the elder comedian died in 2008 at age 81.

“I’m still me,” he said. “I know I’m still funny. When I first got up on the mic for “Dolemite,” there were a couple scenes with an audience and I was improvising and they were laughing and I had flickers of ‘Oh yeah, I remember that sound.’”

Already the subject of Oscar buzz for his performance – “It never sucks to be in those conversations,” he said with a laugh – Murphy was so thrilled with the “Dolemite” experience that he’s moving up his returns to stand-up and “Saturday Night Live,” which gave him his big break in 1980.

“This is a good thing to pop back up with, and while I’m at it, I might as well go back to ‘SNL,’” Murphy recalls of deciding to host for the first time in 35 years.

“When I was back there for the 40th anniversary, I started having the kind of feelings you would have when you go back to your old high school. The show is a big part of my personal legacy and I was like, ‘Let me go back to where I came from, and be funny there and have some fun.”’

And he’s happy to be back in the game. “It’s great to be in a movie that works and that’s funny,” said Murphy, who is currently working on sequels to “Coming to America” and “Beverly Hills Cop.”

“That’s the only reason why I’m making movies. I want to be in one that people like, and it’s been a long time since I’ve had one. [“Dolemite”] is a well-made movie and it’s f***ing funny, and that’s a good feeling.”