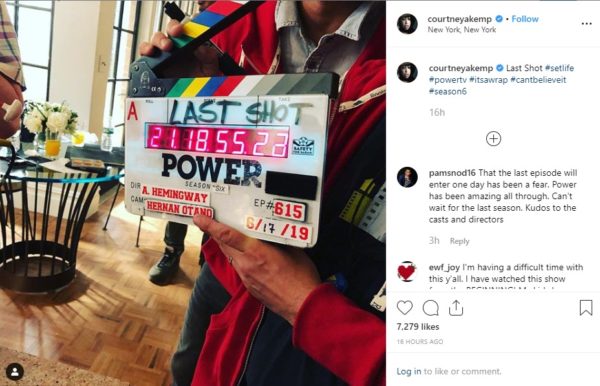 Cast members like Naturi Naughton, who plays Tasha St. Patrick, posted the picture and included a message, as did La La Anthony, who plays Lakeisha Grant. Courtney Kemp, the show’s creator, also brought up the last scene being filmed, and she was the first out of the three women to do so.

Anthony posted her message on Tuesday and said being on “Power” changed her life completely.

“And that’s OFFICIALLY a wrap on POWER…the final season🙏🏽😢,” she wrote. “I’m forever grateful to the cast and crew of this AMAZING show. This show changed my life in so many ways!!! WE DID IT. Take this last ride with us when our final season premieres on Aug 25th. Love you for always supporting us through the years.”

But “Power” won’t be the last time Anthony is seen on Starz, the network that airs the crime drama, because she’ll be on a new show called “Intercepted,”developed by 50 Cent‘s G-Unit Films and Television.

Meanwhile, Naughton, who’s busy working on new music, also posted her goodbyes to “Power” and, like Anthony, seemed shocked that it’s all over.

“Aaaand…. THAT’S A WRAP! @power_starz#finalseason 😩” she wrote on Tuesday. “THANK YOU FOR 6 YEARS OF MAGIC! I’m still in shock… waking up today without a call time was weird! Lol. I love my Power fam and I will miss you all dearly! I am forever changed!”

“This breaks my heart to know there will be no more Power.💔But congrats for doing an amazing and outstanding job!❣️” someone wrote under Naughton’s Instagram post.

“It’s not supposed to just end like this, I’m truly going to miss this show, the cast, every thing about it, this is definitely my favorite show,” someone else wrote under Anthony’s message.