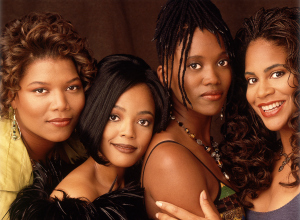 There is no “Living Single” without all the cast members. They were all so different from one another, we need all four ladies to make the show as dynamic and iconic as we now know it to be. And while I related to Khadijah more than the rest of the women, if there was a standout, it was Maxine Shaw, attorney at law. Maxine the Maverick.

But according to the show’s creator Yvette Lee Bowser, Maxine almost didn’t make the cut.

Bowser currently writes for Netflix’s “Dear White People,” and during a sit down with the streaming platform’s “Make A Scene,” she explained how she had to put up a fight to keep Erika Alexander’s character on the show.

When asked when she felt unseen in this business, she said:

“I’d have to say that the moment that I felt unseen in this business was also kind of a pivotal and career-defining moment for me. And it was the moment when I got my first set of notes on the first show I created, Living Single. And they wanted me to remove the character of Maxine Shaw from the show because she was unapologetically Black and female and fierce, and all of the things that, if I wasn’t at that time, I wanted to be ultimately. And I knew that that would be a powerful force in the world ’cause I know that our art is, you know, our art is our activism, and I knew that that voice had been missing. And I was told to take the character out of the show in order to get the show picked up. And even though I had everything to lose, I stood my ground and said to take Maxine Shaw out of the show is to take a big part of me out of the show and I’d rather not do the show.”

Thankfully, they listened to Bowser and kept her in the show. Can you imagine if they hadn’t? Maxine inspired so many women. Alexander said that women have told her time and time again that her character inspired them to pursue a career in law.

Even if we didn’t get into the justice system, for the rest of us, Maxine so clearly demonstrated what it looks like for a Black woman to advocate for herself, always. She was so important.