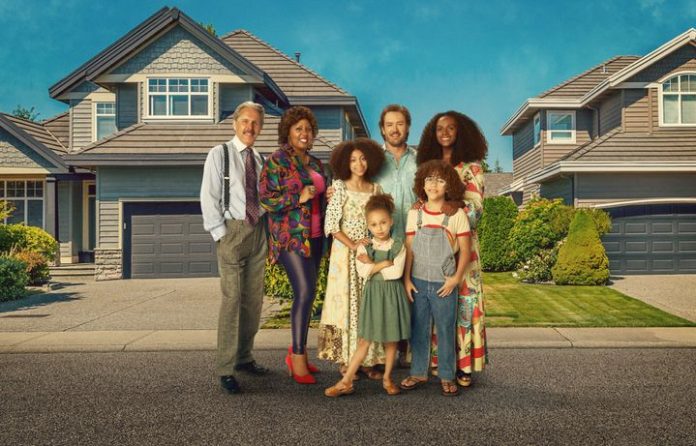 “Black-ish” has prided itself on being a provocateur when it comes to conversations about race. It centers an upper-class African American family that has achieved a remarkable level of privilege that disproportionately fewer Black people have seen. On the other hand, they have to reckon with the fact that they are token Black people living among the mostly white 1% in Los Angeles. That’s particularly frustrating for the matriarch, Rainbow Johnson (Tracee Ellis Ross), a biracial doctor whose formative years living on a commune taught her that true equality transcends race and class.

While the weekly lessons on “Black-ish” have sometimes had an airy tone, the series made a point to acknowledge and confront recognizable themes like self-identity, diverse Blackness and racism. So it’s strange to watch its new spinoff, “Mixed-ish,” completely abandon the original series’ acute awareness for the sake of a comedy that oversimplifies the truth about what it means to be Black in a commune.REAL LIFE. REAL NEWS. REAL VOICES.Help us tell more of the stories that matter from voices that too often remain unheard.Support HuffPost

“Mixed-ish” tells the story of young Rainbow (Arica Himmel) struggling to adjust to the harsh reality of race relations outside the commune. In a voiceover in the first episode, Rainbow recaps that her mom and dad (Tika Sumpter and Mark-Paul Gosselaar) were racial and social justice advocates who joined a commune to insulate themselves and future children from the bigotry and toxicity in the outside world. That of course raises questions about how the commune maintained this ideal of racial harmony in 1985 America, but audiences don’t get any of that explanation. Instead, the first episode focuses on what happens with her family after it’s forced to move to the suburbs when its commune is raided by federal agents.

Rainbow and her siblings (Ethan William Childress and Mykal-Michelle Harris) attend elementary school for the first time and are perplexed by the concept of racial identity and how it influences their classmates’ view of them. The direct contrast to their egalitarian principles leaves them in such a social quandary that the younger children try to assimilate to the hip-hop culture they see among their peers. Rainbow chooses to abide by the commune’s teachings and blindly navigate her school as though everyone is the same, regardless of race. Meanwhile, their parents, Alicia and Paul, wonder how to explain their Blackness to them.

It’s already absurd that two parents who were so cognizant of the racism that pervades the outside world would have never had a conversation about race with their kids. But it’s even more astonishing that a franchise like this would perpetuate a prevalent false image in pop culture imagining that communes, which are mostly inhabited and run by white people, are completely ignorant of race. (See “Midsommar” or “Martha, Marcy, May, Marlene,” for other examples.)

Hari Ziyad, who wrote the Black Youth Project article, “’Mixed-ish’ and the Anti-Black Myth of Post-Racial Insulated Societies,” discussed experiencing rampant racism as a Black child visiting religious communes with their mother, a Hare Krsna devotee. Like Rainbow’s mom, Ziyad’s mother joined a commune in part to escape the bigotry of the outside world. For Ziyad, who stayed in communes in West Virginia and Pennsylvania, the message was often an ideal that everyone is the same, regardless of race. But that was a double-edged sword.

“A big teaching in the Hare Krsna religion is that we aren’t the body,” Ziyad, who uses they/them pronouns, told HuffPost, referring to the belief that we are spirits and souls, not physical bodies. “That was used a lot to minimize the importance of race and the effects of racism within these communes.”

Ziyad recalled a story of their mother’s own guru telling her, “‘If someone is racist towards you, that’s their problem. But if you allow it to affect you, it’s your problem,’ which is a really fucked up way to think about it.”

Ziyad also detailed regular instances when non-Black devotees hit or otherwise disciplined them and other Black children for basic childlike actions, often giving them suspicious looks and accusing them of being thieves because they were Black.

While explicit racism may not be as common in communes like the fictional one the Johnson family lived in, it’s a bit more complicated than the colorblind lifestyle described on “Mixed-ish.” Those who preach about equality and social harmony often simultaneously use coded microaggressions like those Ziyad experienced to implement these values.

And even the most devoted adult members, like the Johnsons, can identify that disparity in religious communes and secular ones alike. Ira Wallace, a decadeslong advocate of commune living, eventually started her own community after trying and failing for years to recruit more Black and brown people to her former commune, Twin Oaks Community in Virginia. Twin Oaks has strict policies that encumber many people of color from joining; among them are rejecting potential members with multiple children or high student loans, as it is an income-sharing community.

“There are many hidden cultural things that make it hard, and I gave up going against the tide,” Wallace said. “Sometimes when you have something that addresses a certain set of problems — living there together, owning land and so forth — to make a significant difference would mean changing pretty much everyone who came in.” She adds, “And a lot of people would have to be committed to that.”

Kayisha Thompson certainly couldn’t get any supporters when she lived in two separate secular communes in Brooklyn, where she regularly endured unequal treatment and snide remarks from her non-Black roommates. On top of that, she said she found herself doing all the housework.

Thompson tried to talk to one roommate in the first commune about pitching in with the cleaning. “He said, ‘Well, you’re a Black woman, so you should be doing the cleaning,’” she remembers. “It was really bad. I mean, I would come home and step in dog feces or urine.” She conceded and did the chores, but later gave up living in communes altogether. “I’d clean up after them just so I could have a decent space to take care of my hygiene.”

“Mixed-ish” asks us to believe that the commune that the Johnson family lived in was somehow absent of all these microaggressions. But it’s more plausible that Alicia and Paul simply overlooked them in order to bolster a racial utopia for their children that ultimately proved damaging. That’s how Ziyad describes their mother’s recollection of experiences inside the commune.

“She remembered all these instances,” they said. “But she was able to recognize how [the commune] benefited her and overshadowed the harms that it might have caused.”

Despite how fiercely their mom maintains her stance toward the commune, Ziyad said that she still made sure her children were always aware of their Blackness and understood racism. Rainbow and her siblings, on the other hand, are completely ill-equipped to navigate the outside world.

That never gets resolved in the “Mixed-ish” pilot, which plays their delusion for laughs instead. There is hope that this could happen down the line as we see Alicia finally have a heart-to-heart with Paul about reentering corporate America as a Black woman. But the mostly reductive episode hinges on the assumption that the audience has no knowledge of how race functions in communes, undercutting the franchise’s intentions to provoke a more contextualized conversation about Blackness.

“Mixed-ish” writers should not be deceiving viewers but educating them. Otherwise, what’s the point?