Regina King is teaming up with John Ridley in order to produce No Place Safe, a drama series about the Atlanta child murders.

The project, in which King will star, is based on Kim Reid’s memoir No Place Safe, with Wendy Calhoun of Empire doing the adaptation.

At the time of the Atlanta child murders, which took place from mid-1979 until May of 1980, at least 28 African-American children and young adults were killed. Eventually, Wayne Williams was arrested and convicted of two adult murders, though several of the child murders have also been attributed to Williams, though he was not tried or convicted of any of them despite the cases being closed.

No Place Safe was told from a 13-year-old Reid’s point of view as she watched her mother, one of the investigators in the case, race to track down the murderer. 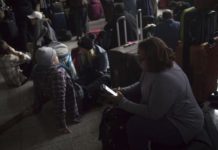