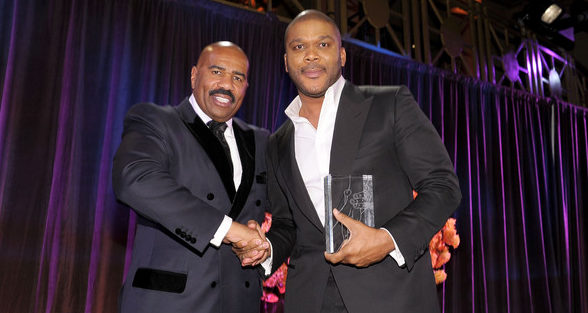 Steve Harvey has teased that his next project involves media mogul Tyler Perry.

In a short clip shared to his Instagram page Friday, Steve is at Perry’s new studio in Atlanta, and both Hollywood A-listers are hugging one another as the crowd gathered around them cheers, per Atlanta Black Star.

“This brothers studios you have to see UNBELIEVABLE !!!!! Just shot a special project there coming soon…… but y’all gotta go see it @tylerperry @tylerperrystudios,” Harvey captioned the footage.

Perry’s 12 stage studio opened earlier in October and features a variety of sound stages, each named after iconic of Black artists.OTHER NEWS YOU MIGHT HAVE MISSED: Dwyane Wade Inks Multi-Year Deal with WarnerMedia + Jordan Says Curry is ‘Not a Hall of Famer Yet’

We reported earlier… the 330-acre entertainment complex – which used to be a military facility named Fort McPherson -is the only major film studio in the nation owned by an Black American.

Among the many celebs that showed up to walk the red carpet at the grand opening a few weeks ago were Halle Berry, Cecily Tyson, Whoopie Goldberg, Oprah Winfrey, Samuel Jackson, Spike Lee and Viola Davis.

Harvey, meanwhile, has continued to maintain his presence in Hollywood after his talk show “Steve” was canceled over the summer. In addition to his work with Perry, Harvey recently invested in two TV networks and he’s also set to take “Family Feud” international, as the popular game show will reportedly launch versions in South Africa and Ghana, that Steve will host.

According to Deadline, “in an unprecedented deal with Fremantle, Harvey’s media company Steve Harvey Global has obtained the rights to license the format for the African versions of Family Feud,” the outlet writes. The local versions will be produced by Rapid Blue, Fremantle’s production partner in the region, the report states.