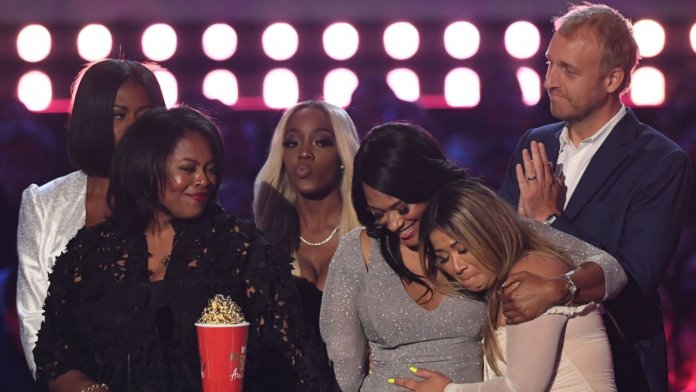 It was a touching moment onstage when R. Kelly’s alleged victims helped accept the award for best documentary at the MTV Movie & TV Awards after bravely lending their voices and stories to Lifetime’s Surviving R. Kellydocumentary.

The doc, which premiered earlier this year and sparked (and re-sparked) numerous investigations into the R&B singer, beat out other critically acclaimed docs, including At the Heart of Gold: Inside the USA Gymnastics Scandal, RBJ, Minding the Gap and McQueen.

“This isn’t just a trophy to us. It speaks to the cultural impact that it generated from this documentary,” Lifetime’s senior vice-president of unscripted development and programming, Brie Miranda Bryant, said onstage. “This team believes in the power of numbers.”

“Fifty-four individuals sat to tell this story,” she continued. “Survivors walked through the fire and stood again to tell the story.”

Bryant also thanked the many “journalists, activists, bloggers [and] tweeters who continued to say the name of these survivors,” along with the alleged victims’ parents.

Still, the Lifetime exec also had a special message for Kelly’s alleged “survivors and parents.”

“We know the journey doesn’t start or stop with this journey, but the world is listening now,” Bryant said tearfully. “Because of your bravery, others are speaking without shame and being heard without judgment. Because of your courage, you created change and you survived.”

Although Kelly continually denies sexually and physically abusing women throughout his career, he was charged back in February with ten counts of aggravated sexual abuse in connection with four victims, three of whom are underage. He pleaded not guilty.

Also, last month Kelly was charged with 11 felony counts of sexual assault and sexual abuse, stemming from a 2010 incident with a then underage Jerhonda Pace. The singer pleaded not guilty to these counts as well.

Other winners at the MTV Movie & TV Awards include Nick Cannon, who nabbed best host for his post on Wild ’n Out, and Love & Hip Hop: Atlantawon bragging rights in the reality royalty category.