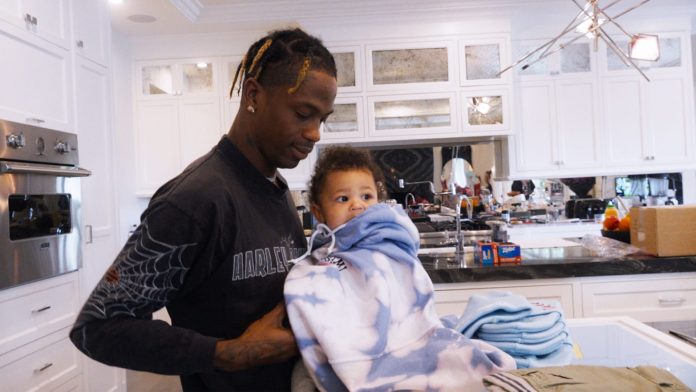 Netflix released a documentary about rapper Travis Scott’s childhood, career, and sentimental attachment to amusement parks, titled Look Mom I Can Fly. The 85-minute film primarily focuses on Scott as a performer, spliced with brief glimpses into his relationship with “self-made” billionaire reality star Kylie Jenner and their 18-month-old daughter, Stormi (the toddler is credited as an executive producer). Within the first few minutes, a breathless fan shouts, “Travis motherfuckin’ Scott, the greatest live performer on the planet.” The rest of the documentary seems propelled solely by the intention to convince other people that such a grandiose proclamation could be true.

Look Mom I Can Fly, directed by White Trash Tyler, is structured like a diary, with segments delineated by date, location, or significance. Much of the film follows the production and release of Astroworld, the rapper’s third album. When Astroworld dropped last summer, featuring guest vocals from stars like Drake, Frank Ocean, James Blake, and The Weeknd, it received near-universal critical acclaim. While the documentary does not provide much new insight into the making of the album, it does contextualize the significance of the album’s name with home videos from Scott’s childhood in Houston, Texas.

Astroworld is named for the defunct Six Flags theme park in the city where Scott, whose real name is Jacques Webster II, grew up. Grainy home video footage from the ’90s shows a young Scott pointing at a roller coaster from his seat inside a nearby train ride. Go-karts zoom in the background as he asks, “What happening, Daddy?” In another clip from the theme park (also called AstroWorld, which closed in 2005), he’s wearing overalls and shouting at his family from the back seat of a yellow propeller plane. The film cuts to a shot of Scott reclining on the buttery-leather seat of what appears to be a private jet, lingering on the gigantic diamond dog-tag around his neck bearing his childhood nickname, “Jack,” in rainbow letters.

In a 2017 interview with GQ, the musician explains his inspiration for the album: “They tore down AstroWorld to build more apartment space. That’s what [Astroworld] is going to sound like, like taking an amusement park away from kids. We want it back.” The passion project earned Scott his first-ever Grammy nominations, for Best Rap Album and, for the single “Sicko Mode,” Best Rap Performance and Best Song.

In Look Mom I Can Fly, we watch as he loses the Best Album award to Cardi B. It’s an opportunity for the film finally to probe beneath the surface of its subject, but instead we get nothing more than his immediate reaction as he walks away stony-faced and unleashes a quiet torrent of f-bombs. We never hear from him about how he feels in the aftermath—an unfortunate loss for a documentary that often struggles to be anything more than, ironically, a Grammys campaign several months too late.

The fleeting moments devoted to Kylie Jenner’s pregnancy and labor are essentially a series of deleted scenes from Keeping Up with the Kardashians. The sincere wonderment with which the rapper regards his burgeoning fatherhood is equal parts touching and amusing. As a doctor gently prods Jenner with an ultrasound machine, Scott leans close to his pregnant girlfriend’s gel-coated belly and says, “I’m trying to figure out how much pressure you’re applying to that thing, OG. There’s a young up in there, OG.” He bursts with pride when he shows friends the sonogram: “No lie, it’s the livest thing of all time.”

Later, the unmistakable trill of America’s favorite momager, Kris Jenner, cuts through the emotionally charged delivery room scene as she shouts, “Travis, cut the cord!” I was reminded of Scott’s 2018 interview with Ellen DeGeneres where he utters the unintentionally hilarious phrase, “There’s, like, this thing called the placenta that I just been hearing about,” whilst talking about how “Mama KJ” helped him navigate the unfamiliar experience of being in the delivery room.

A section labeled “Birds Eye View Tour” focuses on the fanatical mosh pit energy that defines the 28-year-old’s concerts. Scott’s trademark is pulling fans on stage and encouraging them to leap into the screaming, undulating crowd below. Crowd-surfing is a regular occurrence at his shows and it’s unfortunately not limited to willing volunteers. At least twice in one concert, Scott pauses his performance to supervise as the unconscious bodies of fans who fainted in the chaos are passed from person to person until a security guard can reach them.