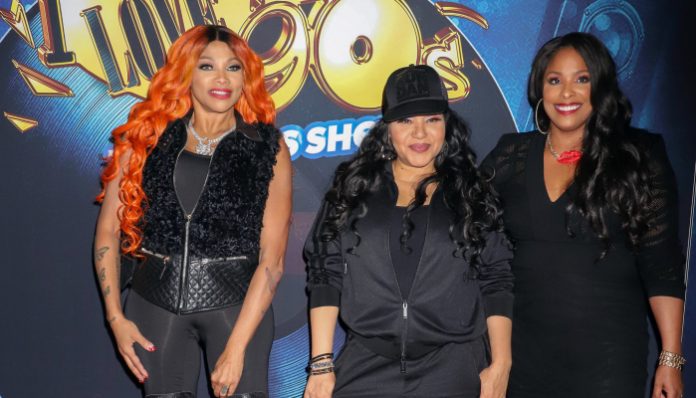 Spinderella, the DJ known for her work with rap trio Salt-N-Pepa, is suing her former bandmates in unpaid royalties.

According to The Blast, the DJ filed a federal lawsuit against the women after they abruptly fired her. Spinderella, whose real name is Deidra Roper is suing Pepa (Sandra Denton) and Salt (Cheryl James.) The lawsuit states that the group started recording and performing in the mid-1980s. Spinderella says she helped create the success of the group.

Even though the band went into hiatus in the late 90’s, Spinderella continued promoting the band. But things took a turn in the early 2000s when she discovered there was a “Best Of” compilation album being released. Spinderella said Pepa told her that she would pay her $125,000 but that never happened.

“By the early 2000s, the Defendants discussed with Roper an SNP reunion which would have possibly involved, among other things, a television show based on the legendary female group’s rise to stardom.”

DJ Spinderella claims that she was promised a third of the group’s profits from the reality show. While she was featured on the show, she has yet to be paid.

According to The Jasmine Brand, this lawsuit is a long-time coming. In addition to royalties from the album and reality show, Spinderella claims she was never paid for the 2018 Billboard Music Award performance.

The Jasmine Brand reports that the lawsuit became necessary when Spinderella learned, through SoundExchange, that the group had earned more than $600,000 in royalties over the last ten years. Spinderella claims she hasn’t received any of that money.

She’s suing for trademark infringement, breach of contract and fraud. She states that the group used her name to advertise their appearances.

Earlier this year, when Salt-N-Pepa announced that they were participating in a tour with New Kids On The Block and Naughty By Nature, but Spinderella released a statement sharing that she would not be joining them because she was kicked out of the group.