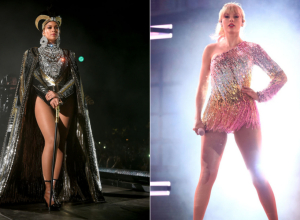 Taylor Swift performed her new single “Me!” for the first time on TV at the Billboard Music AwardsWednesday night, but the effort caught the attention of the BeyHive for all the wrong reasons. They say she ripped off Beyoncé’s Coachella performance, and it’s hard to dispute the similarities.

Swift’s performance opened with a shot of a drumline coming down the aisles of the MGM Grand and on stage dressed in soft pink. Swift arrived on stage in a sequined skater dress, that matched some of the pink worn by the drumline. The performance came two weeks to the day Bey released her 2018 Coachella headlining show on Netflix as part of her “Homecoming” documentary. Bey’s two-day headlining show last spring saw her rocking a sequined HBCU jacket, which was removed to reveal a sequined sweater and cut-off denim shorts. On day one, the star wore a yellow top and on day two, it was pink. Each day, the drumline dressed to match.

That was enough to set off the BeyHive, and they did not hold back in slamming Swift for her performance, which also included her duet partner, Panic! At the Disco’s Brendon Urie.

“I don’t know if y’all are seeing this but Taylor Swift is gentrifying Beyonce’s Coachella performance right now.”

“If you could visualize the taste of LaCroix #mayochella.”

“Beyoncé served us Fried Chicken with macaroni and cheese and collard greens with Hamhocks and homemade skillet cornbread. And here come Taylor swift with rotisserie chicken and potato salad with raisins.”

But the similarities didn’t stop there. After the show, Swift said on social media that she’d be releasing the rehearsal audio from the show on vinyl and CD. Bey dropped a live album of her Coachella set the same day her Netflix doc debuted.

“And then u say ur fav is not a rip off. I’m screaming😂😂😂🙄 now Taylor swift wants to release the live audio of the CD. And she does this exactly 3 weeks after beyonce released her #Homecoming documentary and live album. She’s such a fraud. BTEC version fr🤦🏾‍♀️😂.”

This is not the first time Swift has been accused of stealing from Bey’s motifs. In 2017, she was called out over the similarities between her video “Look What You Made Me Do” and Beyoncé’s “Formation” visual.