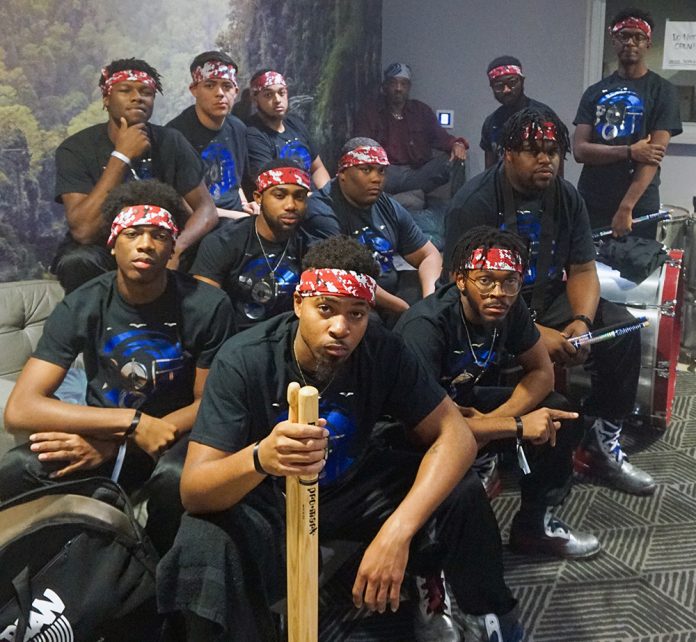 Members of the Ocean of Soul drumline “The Funk Train” opened up for Houston hip-hop artist Megan Thee Stallion at her recent performance at White Oak Music Hall, courtesy of Red Bull. The evening’s line-up was truly all-Texas Southern University, as both Megan Thee Stallion and all members of the Ocean’s drumline are students at TSU. Students in the band, which comprised of the drumline and tubas, conducted a 15-minute set before the artist came out to perform.

“They were looking to have a different type of group open up for Megan Thee Stallion,” said Singleton, “Someone mentioned drumline and they thought of us, called us up and made it happen.”

Red Bull encouraged the band to bring both percussionists and instrumentalists.

“It only made sense that we bring tubas and drums,” said Mario Ramirez, a junior Music Education major from Corpus Christi, TX. A third-year member of the Ocean of Soul, he hopes this performance brings more attention to what the Music Department at TSU has to offer. “I think this performance is a great catalyst of what to expect from the music programs at TSU.”

Ramirez was also excited to perform on the same stage as a fellow student, “It’s really cool to perform for (Megan Thee Stallion).”

Jesse Holloway is a junior Music Education major from Houston who serves as the drum section leader. He says they often participate in gigs to help raise funds for the band, but this performance was special. “It’s cool to be doing something with her,” said Holloway, “She is a part of us.” With the artist being closer in age to the students, they said they felt more of a connection. “It means a lot and is a really cool opportunity,” said Holloway. “This is probably one of the coolest gigs we’ve done.”

Megan Thee Stallion is pursuing a degree in Health Administration at TSU. Her performance coincided with the announcement that she was named to Forbes “30 Under 30” Music Class of 2020 list.