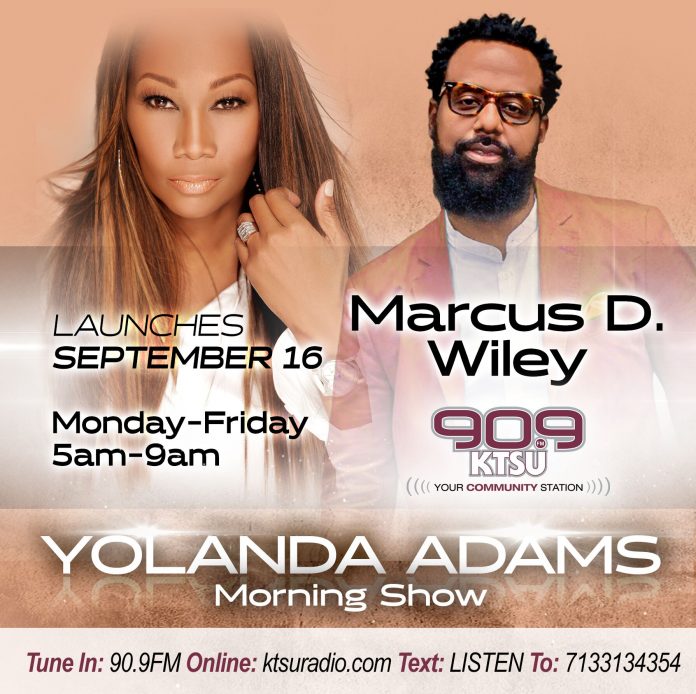 Texas Southern University’s public radio station KTSU 90.9 FM has pulled off a major programming coup, snagging the nationally syndicated “Yolanda Adams Morning Show” that will kick off broadcasting from its new home on Monday, Sept. 16. The show will air every weekday morning from 5 a.m. to 9 a.m., and will feature Adams and her on-air partner in crime, comedian Marcus D. Wiley.

“We have this opportunity to take what is already an amazing entity to a whole new global level, and I am so excited that I get a chance to take this ride along with every one of you in this room, especially our general manager [Ernest Walker], especially my dude Marcus,” said Adams echoing Walker’s words to open the standing-room-only press conference.

“KTSU is headed to become the number one urban public radio station in the country, and we’re not going to stop until we get there,” Walker said, who has been credited with the station’s meteoric rise from already respectable levels when compared to other public radio stations nationally, to having the top spot in its sights.

TSU’s VP of University Advancement, Melinda Spaulding, provided context regarding the significance of Adams’ show now being located at KTSU.

“We are so excited about the ‘Yolanda Adams Morning Show’ coming to KTSU, and the exposure for our campus and our students, and we can now say with pride that a nationally syndicated radio show will originate from the campus of Texas Southern University,” stated Spaulding. “And what’s even better about that is the show features two Houstonians and two TSU alumni.”

Adams, a multi-Grammy Award-winning gospel legend who has sold nearly 8 million albums worldwide, graduated from TSU in the 1980s and started a career as a teacher and part-time model before attracting the attention of individuals in the gospel music world.

Wiley, an alumni of Willowridge High School and TSU, served as a professor at his alma mater for 15 years. But it was his hilarious, “clean” comedy that caught Adams’ attention. She then invited him to be her show’s co-host. The rest is history, a history the pair continue to write.

Adams recalled a radio “guru” telling the pair if they wanted to have a successful show they would have to generate confrontation. The duo disagreed, each stressing that what works with their audience is bringing their authentic selves to each show with no pretense.

“What I like about the ‘Yolanda Adams Morning Show’ is it fits the theme of KTSU; we’re all about community…We’re not confrontational. We try to be good people. We’re practicing Christians. Yolanda’s a little better than me because you know she’s real tight with the Lord. He hears her prayers like this. With me, he puts me on hold sometimes,” joked Wiley.

Wiley said he realized the show’s impact on lives when they started receiving “real” calls.

“Callers would say, ‘My mom, she has cancer. She’s stage 3, stage 4 and she listens to y’all every morning and she feels so much better,” said Wiley, who now sees clearer the responsibility he and Adams have as on-air personalities.

Adams added that they are excited about the opportunity to pour into young people experiences she and Wiley had not only in radio but in life.

“This is a calling for us,” she said. “There’s some people who will not go to a physical church but they feel comfortable enough talking to people they know have spirit…And you cannot duplicate presence. You cannot imitate presence. It has to be there. And that’s the one thing that I love about us. We’re not trying to be anybody else. We’re authentically ourselves.”