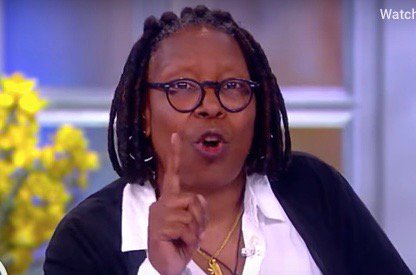 Whoopi Goldberg chided Roseanne Barr on Wednesday for sharing a picture which had been manipulated to depict Goldberg, a “The View” co-host, wearing a shirt with a graphic image of President Trump.

“So this is what I’m going to say, Roseanne — just because you were caught with your pants down, don’t try to drag other people down with you,” Goldberg said on ABC’s “The View,” calling the doctored photo “horrific.”

Barr had retweeted an image of Goldberg participating in the Women’s March in 2017, but the image had been altered to portray Goldberg as wearing a shirt depicting Trump shooting himself over text with his signature phrase “Make America Great Again.”

The real image is on the right pic.twitter.com/b2OazIW7SY

The Twitter user who posted the fake image that Barr retweeted wrote, “Out of curiosity @ABC & @Disney this is okay with you? Hypocrisy on the Left is sickening! Your pathetic! #BoycottABC #IStandWithRoseanne.”

Barr had retweeted the photo after ABC canceled her show on Tuesday over a racist tweet she sent about former President Obama’s adviser Valerie Jarrett.

“I didn’t fake my shirt. Someone else faked my shirt,” Goldberg said Wednesday.

“But that’s your tweet. That’s on you. You did this to yourself,” she added in comments directed at Barr.

Trump on Wednesday blasted ABC for canceling the show, accusing the network of having a double standard when it comes to statements made about himself.

“Bob Iger of ABC called Valerie Jarrett to let her know that ‘ABC does not tolerate comments like those’ made by Roseanne Barr,” Trump tweeted. “Gee, he never called President Donald J. Trump to apologize for the HORRIBLE statements made and said about me on ABC. Maybe I just didn’t get the call?”