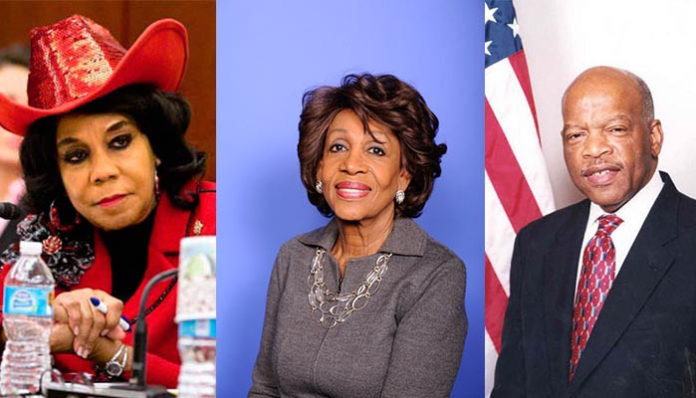 Trump is on notice once again! Black Democrats are expected to boycott the president’s first State of the Union address on January 30 after his racist rant referring to Haiti and several African nations as “shithole countries” last week.

Here is a list of Democratic Congressional Reps who are tired of Trump.

Auntie Maxine is not having the president’s hate! She called for the immediate impeachment of Trump in a strong statement on Friday.

“Donald Trump is a racist and indecent man with no good values who is woefully unfit and undeserving of the office in which he serves,” Waters said. “That this president, a deeply flawed human being with no understanding of public policy, would make such ill-informed and deplorable comments about Haitians, Salvadorans, and immigrants from African countries, merely underscores everything we already know about him: he is a hopeless and ignorant bigot.”

She said that she “doesn’t intend to go” to the SOTU interview on MSNBC’s All In With Chris Hayes.

“I don’t trust him, I don’t appreciate him and I wouldn’t waste my time sitting in that House, listening to what he has to say,” she said, according to The Hill. “He does not deserve my attention.”

This will be the first time that Waters has skipped a SOTU.

Lewis, a veteran Georgia congressman and civil rights icon who marched with Martin Luther King Jr., explained his decision to sit out of Trump’s upcoming address as a result of the president being “a racist.”

“In good conscience, I can not and will not sit there and listen at him as he gives the State of the Union address,” Lewis said on This Week Sunday.

Wilson will also not attend Trump’s address, she said to ABC News. The president’s message will be one of “innuendo, empty promises, and lies,” she added.

“It would be an embarrassment to be seen with him at a forum that under any other president would be an honor to attend,” Wilson said.

Richmond, who chairs the Congressional Black Caucus, may skip the address as well. He will “talk about” boycotting SOTU as a caucus during a meeting Wednesday, he recently told CNN.

Indian-American democratic congresswoman, Rep. Pramila Jayapal (Wa.) will also boycott the SOTU, she announced on Twitter. New Jersey Senator Cory Booker, along with all Democrats, are being called on to join the boycott as well.