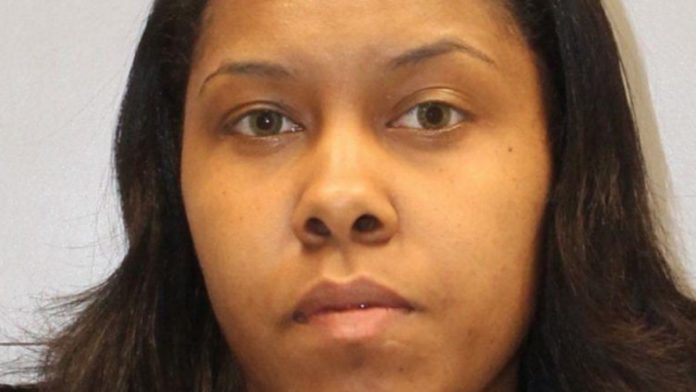 A custodian at a South Carolina high school cleaned out more than dirty bathrooms.

Aisha Evans is charged with rummaging through the bookbags of unsuspecting students and stealing $180 while students were out of the classroom, protesting during the National School Walkout at Richland Northeast High, CNN reports.

The Sheriff Department said Evans took the cash from at least three bookbags while students were stolen by Evans while students were outsideprotesting in support of stricter gun laws, following the Parkland school shooting. The 32-year-old was arrested and charged with three counts of petty larceny. As a result of the petty theft, Evans lost her job as a custodian for Service Solutions, an agency that contracts with the district to provide custodial services.

“On Thursday, March 15, Service Solutions notified Richland Two that Evans is no longer an employee of the company and was informed that she cannot come on any Richland Two property,” Richland Two School District said in its statement to the affiliate.

It’s unclear whether Evans has retained a lawyer.

Repercussions for Walking Out

The fallout from the National School Walkout continues across the nation.

While many communities have reported nothing but positive responses to students exercising their right to free speech there are some that are reporting different outcomes.

Approximately 1,100 students walking out of Downers Grove North and South high schools in a suburb in Chicago and school administrators have decided that the students will serve one hour of detention as a result.

According to the Chicago Tribune, the Community High School District 99 representatives reportedly met with students before the planned walkout and offered several alternatives “that would not disturb the educational environment,” spokeswoman Jill Browning said in an email.” Students rejected the options, Browning said, and “intended to have a political rally around a variety of issues.”

According to the Chicago Tribune, Browning said, “Students have shared they consider the detention a ‘badge of honor’ and a symbol they truly are protesting and standing up for their rights at a personal cost.”

Three students in Arkansas reportedly received an old-fashioned punishment for walking out of their school during the national protests against gun violence.

Students at Greenbrier Public School in Arkansas are allowed to get “swats” as a form of corporal punishment for disobedience in the conservative school district, according to the Daily Beast.

Undeterred by the school policy, students felt empowered to join kids around the country when they walked out of their classrooms to advocate for stricter gun laws.

The Greenbrier Public School’s official policy, states the school board “authorizes the use of corporal punishment to be administered in accordance with this policy by the Superintendent or his/her designated staff members who are required to have a state-issued license as a condition of their employment.”

But one proud local mom said she didn’t mind that her child got the swat and supports his right to protest in support of gun reform.

“My kid and two other students walked out of their rural, very conservative, public school for 17 minutes today,” Jerusalem Greer wrote on Twitter. “They were given two punishment options. They chose corporal punishment. This generation is not playing around.”