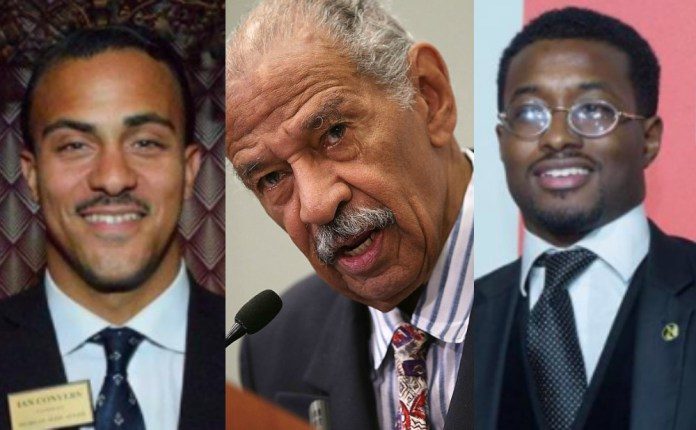 Jay-Z’s theory that “nobody wins when the family feuds” is about to be challenged in Michigan, where the great-nephew of former U.S. Rep. John Conyers formally announced his bid on Friday to succeed his great-uncle. There’s just one problem, though: While the elder Conyers was indeed looking to keep his congressional seat in the family, the relative he wants to take his place is his own son. That preference could make the next family cookout pretty awkward.

But that didn’t stop Ian Conyers, who is a sitting state senator in Michigan, from officially declaring his candidacy for the 13th Congressional District in the United States House of Representatives.

Conyers, the former congressman, formally endorsed the would-be candidacy of his son, John Conyers III, on the same day he abruptly resigned last month following reports that he had previously committed acts of sexual misconduct and harassment.

While his son had never expressed an interest in running for public office before, it may have been Ian Conyers incorrectly attributing his great-uncle’s resignation to health issues that convinced the former congressman to endorse his son over the already politically established state senator.

Still, Ian Conyers, who said he was running on a “stop Trump agenda,” brushed aside any concerns of facing off against John Conyers III in a primary, according to the Detroit News.

“It’s my understanding he (Conyers III) hasn’t decided if he even wants to run for the seat,” he said. “I am fully committed.”

Meanwhile, Conyers III has been busy trying to explain his past brushes with the law that include being charged with stabbing his then-girlfriend.

“The DA dismissed the charges, but it’s something that causes me a lot of anguish and now it’s associated with me,” he told CNN last month. “I know what happened, and I know I’m innocent.”

Despite what is sure to be a crowded field of congressional hopefuls — Michigan State Sen. Coleman Young III has also declared his candidacy along with Detroit attorney Michael Gilmore — Conyers appeared confident, if not defiant, during his announcement Friday.

“While others (candidates) will have to familiarize themselves with Washington and how it works I already have a good idea,” he said. “I am prepared to begin work from day one that I am elected to office.”

Either way, the former congressman is sure to have something to say as we get closer to the primary in August. Get your popcorn.