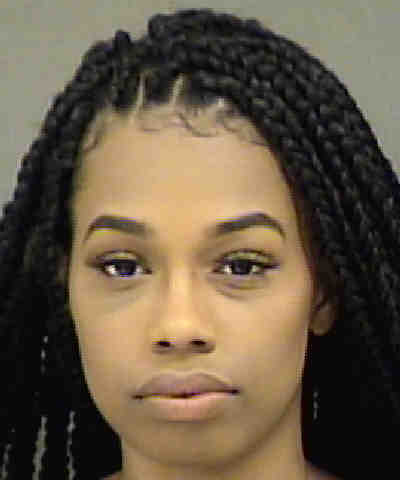 When life gives you lemons, make lemonade. And when the Mecklenburg County Sheriff’s Dept. gives you a mugshot, use it for marketing.

That’s the savvy business move made by Shia Yearwood, a hairstylist in Charlotte, North Carolina, after she was arrested on a misdemeanor charge for violating a domestic protective order last Wednesday.

Yearwood said the arrest stemmed from a dispute between her and her son’s father over visitation, according to WAFB-TV.

The twitter account @charlottemugs posted her booking photo and it attracted lots of attention ― but not the kind she expected.

When one person wrote, “Okay, but who did her hair?” the 24-year-old sensed opportunity was knocking.

“Me,” Yearwood replied, according to the Charlotte Observer.

She retweeted the mugshot, adding “can’t hold me back either” and the hashtag of her business, #braidsbyshia.

Since then, the mug has been re-tweeted more than 4,000 times, and Yearwood says people are contacting her about setting up appointments.

Yearwood said the retweet was her way of taking ownership of the situation.

“I retweeted it because me and my friends were joking between us like I [should] just clown myself before my friends find it and clown me first,” Yearwood told InsideEdition.com.

She added: “I felt like I look good in my picture.”

She told BET that “I thought my braids looked amazing — they were literally done two hours prior to the mugshot.”

Yearwood has been braiding hair since she was a youngster, and credits her grandmother and godmother for teaching her how to do it, even though she wasn’t a big fan at first.

“To be honest, I wasn’t quite interested in braiding because I use to do micros, and they took way too long to do,” she told BET. “Then I learned to do the Poetic Justice braids when I was experiencing hair loss after my daughter was born. I got a good reaction from family and friends. Because I was a young mom with no money for daycare, I did hair to just make a little money to get her [the] essentials.”

Yearwood views her reaction to the arrest as a positive.

“I overcame it,” she told Inside Edition. “I am not bad. I am not sad. I wasn’t hurt. Someone tried to break me and it just worked out in my benefit.”